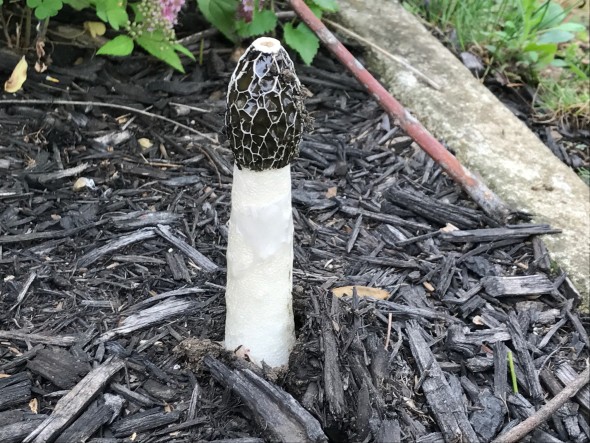 There was a time when, for at least a second or two, my boss thought I might have a severed human appendage in a filthy Kroger bag under my desk.

How did get myself into this mess?

I blame the mushrooms.

Each fall and spring I look into my yard to find that everything’s coming up fungi. During the moist, temperate seasons my lawn becomes home to the most heinous mushrooms you have ever seen. Their white 5 – 6 inch shafts end with a helmet-like, purplish brown tip.

Picture it, if you will.

And then picture a few dozen standing at attention throughout my lawn.

I never have seen this particular brand of fungus anywhere else on earth but in my yard. Lucky me.

They are upsetting to look at. Their unseemly appearance drives my neighbor kids crazy. One boy – normally sweet and smiley – cannot abide them. The minute he sees a bloom he gives it a swift kick.

Do you know what looks worse than a yard full of erect mushrooms?

A lawn littered with amputees.

I’m surprised the mailman will even deliver to our house.

I’ve tried to find out what type of mushroom they might be, hoping in vain to eliminate the fungus without killing my lawn. But they’re hard to describe if you’re looking for a serious answer.

The internet is no help at all. Type “mushrooms” into Google and you’ll come up with 15.1 million possible links. Narrow the search terms and you’ll likely get descriptions like “sexy science,” which, at first blush, looks like it actually might have the information you seek, until you realize the mushroom they’re talking about is only two inches long.

My mushroom is bigger than your mushroom.

Meanwhile, my husband, George, was doing his own sleuthing. He works for a radio station and, at that time, the station ran a gardening show on Saturday mornings. George emailed a picture of the plant to the show’s host for an explanation.

The host sternly responded, “I do not do that type of counseling. Try Dr. Ruth.”

I once had a colleague who believed, sight unseen, that these were the pre-bloom stage of a spectacular orchid. She advised me to dig them up and keep them in clear glass jars in my basement.

I appreciated the suggestion, but I feared what would happen on the holidays when all our nieces and nephews go downstairs to play ping pong and find a large collection of these severed appendages on my cellar shelves.

I’m creepy enough as it is.

Another colleague had run a landscaping business years ago and offered to take a look. She thought she’d dealt with the same lawn care menace once in a Dublin neighborhood. I bet it went over really well there.

So I dug up a sample and put it in a plastic bag to bring to work. But the stench! I hadn’t known about the odor – this is not the kind of plant you bend down to sniff – until I had one in hand.

It smelled exactly as I would imagine a severed body part left too long in a filthy plastic bag might.

My colleague was late to work and I simply couldn’t tolerate the odor, so I grabbed the bag to take it to the restroom garbage. Unfortunately, I ran into my boss.

“What have you got there?”

I wasn’t sure what would be more jarring and inappropriate, describing it or showing it to him.

I decided the least suspicious thing I could do was dash past him to flee to the ladies’ room, leaving behind a hideous stench. His horrified expression suggested that he got a glimpse of the package.