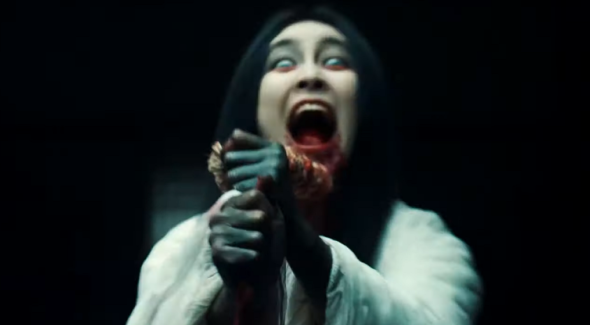 What unspools is a historically set spectral tale of family dysfunction, classism, sexism, and women who hate other women—or, in a single label, the horrors of patriarchy. All of which has been done before, and better. (Please see Jee-woon Kim’s masterpiece A Tale of two Sisters. Seriously, please see it.) But The Wrath is a very pretty film that delivers a fairy tale quality and solid performances.

The Wrath is more of a spook show than Two Sisters, with lots of wraiths and jump scares, lots of blood spitting and black ooze spitting and blood spatter and arterial spray, plus gorgeous costumes and a well-designed and well-used set.

The film drops us into a story in progress. A young girl (Na-eun Son) traveling to the secluded property is intercepted by a well to do son returning home. His step-mother (Young Hee Seo, wonderful), who appears to be head of the household, offers a chilly reception to both travelers.

Soon the girl is pregnant, the son is dead, and there’s something suspicious out in the storage shed.

Yoo’s film works best when he doesn’t try to explain too much. Heavy-handed flashbacks to the events that led to the family’s curse feel perfunctory and uninspired, while the hinted at spookiness generates more atmosphere.

For a period film, Yoo contains the environment to create something both believable and economical, the image of a very pretty yet desolate trap.

Na-eun Son, whose role offers the most layers, particularly impresses, but the whole cast embraces these somewhat slightly written characters. Each performer draws on period appropriate attitudes and, more importantly, finds a way to generate chemistry with the others trapped in the same confined quarters.

If you’ve seen much from Korea’s deep cinematic closetful of wronged-women-turned-vengeful-spirit options, there are few real surprises to be found in The Wrath. It’s a capably made film that wastes little time, boasts strong performances and offers familiar but creepy fun.