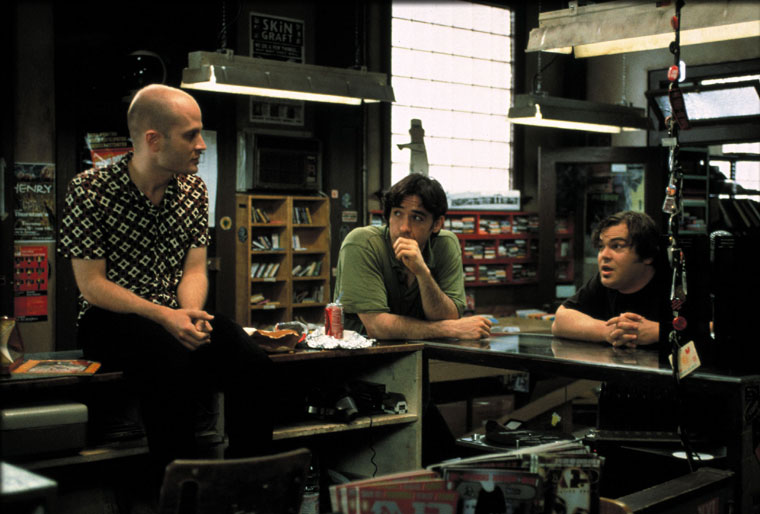 Over the weekend, vinyl nerds the world over celebrated Record Store Day. Well, we want to keep the party going with a trip through a celluloid world where vinyl still rules. For your perusal, our 5 favorite album-oriented movies.

Kubrick’s masterpiece is a real horror show, with one pivotal scene taking place in a record store where our hero, minus his droogies, picks up some Ludwig Van and a couple of young ladies for an afternoon’s respite from the old ultraviolence.

Quote: What you got back home, little sister, to play your fuzzy warbles on? I bet you got little save pitiful, portable picnic players. Come with uncle and hear all proper! Hear angel trumpets and devil trombones. You are invited.

Andie (Molly Ringwald) works at a hip record store. Too hip for Blane (Andrew McCarthy – always ready for a good cry), and yet Andie is blind to Blane’s lameness and Duckie’s clear superiority. Why even work in a record store if you’re not going to use boys’ musical tastes as a date-worthiness gauge?

Quote:  This is a really volcanic ensemble you’re wearing.

A gaggle of misfits fights the man to save their hipster haven. Today it seems almost adorable that the employees of an independent record store have to be worried about being bought out by a chain, but in 1995, this was still a threat.

Quote: Let me explain it to you: Mitchell’s the man, I’m the idiot, you’re the screw up and we’re all losers. Welcome to Music Town.

Record store owner Rob Gordon (John Cusack, in his last really good role) is having a crisis of commitment. Meanwhile, we learn that Jack Black is 1) an unrepentant scene stealer, 2) a pretty great singer.

Quote: Get your patchouli stink out of my store.

England’s loudest rock band, touring in support of its new album (there’s none more blacker), finds fame fleeting. It’s the best mockumentary of all time, among the funniest films ever made, and it boasts – among countless other brilliant scenes – the world’s most hilarious record store promo, courtesy Artie Fufkin, Polymer Records.

Quote: Kick this ass for a man.