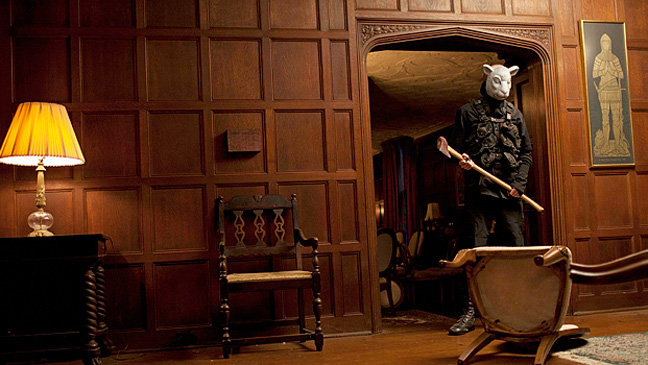 It looked like 2013 might be the year of the horror film. First came the visceral thrill of the Evil Dead reboot, then the spectral fun of The Conjuring. With the buzz surrounding the indie fright film You’re Next, it looked like we might be in store for the season’s third solid genre pic.

Adam Wingard’s film has been lauded as Scream meets The Cabin in the Woods, which isn’t entirely wrong. You’re Next is a derivative work that copies Scream’s wink-and-nod use of genre tropes and applies them to a home invasion storyline, this time set in an isolated, wooded area.

Wingard is part of a new generation of horror filmmakers, a fraternity style community with members who work together frequently. Indeed, Wingard worked with Ti West on the compilation VHS; Bowan co-starred in West’s House of the Devil; West handles a small role in You’re Next as a boyfriend/filmmaker/victim.

Unfortunately, none of them makes particularly good films.

Not that You’re Next is especially bad. It’s just that, aside from some relatively entertaining sibling bitchiness, most of the ideas are cribbed from better films. Masked home invaders is far scarier in The Strangers; the animal masks saw their debut in 1973’s The Wicker Man ; many of the home invasion defense moves come directly from Sam Peckinpah’s Straw Dogs. It’s a long list.

Yes there’s a twist and some humor, but folks calling this film “a cut above” have clearly not seen some of the competition. Hell, You’re Next is not even the best “cabin in the woods” film released this year. What it is, is safe.

You’re Next subverts tensions before they can generate real terror. Wingard either lets the audience in on the secret or injects a bit of humor every time the film gets honestly tense. He undercuts each scene’s opportunity to scare, falling back on humor or action movie one-upsmanship instead.

One of the many genius moves Wes Craven made with his genre-upending 1996 film Scream was to balance humor and scares, to mine that tension that either bursts with a scream or a laugh. That’s the work of a horror filmmaker who knows what he’s doing.

You’re Next is the work of Adam Wingard. It turns out, that’s not quite the same thing.