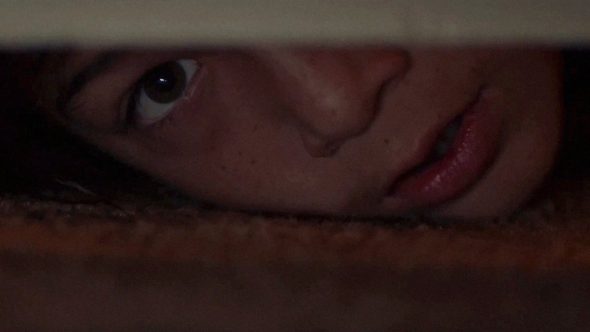 There is something to be said for films that do a lot with very little. The ability to awaken the imagination without the help of a big budget, multiple locations, a giant cast or too much in the way of FX is a credit to filmmakers.

And hell, David Charbonier and Justin Powell’s The Djinn does most of it without dialog.

Dylan Jacobs (Ezra Dewey) and his dad (Rob Brownstein) have just moved into a new apartment. There’s a recent tragedy in their past, but that’s not the only reason Dad’s a little hesitant to go to his shift at the radio station. Dylan is mute and maybe he needs another day or two in the apartment to be truly safe on his own.

Ignoring his instincts, Dad leaves for work. For the balance of the film, we’re alone in the apartment with Dylan and the demon he innocently summons trying to regain his voice.

The Djinn succeeds on the strength of its young lead, who carries every scene without benefit of dialog. Star of the filmmakers’ 2020 horror tale The Boy Behind the Door, Dewey’s emotional performance is enough to keep you compelled for the film’s brisk run time.

Charbonier and Powell have other tricks up their sleeve to elevate their story. Cinematographer Julian Estrada, for one, who gives the impression that the apartment itself is watching the boy. Setting the film in 1988 frees the filmmakers up from recent tech that simplifies communication, which feels a tad like a cheat but does amplify a creepy sense of helplessness.

Not everything works, though. The filmmakers rely too heavily on music stabs and jumps, the soft rock soundtrack is curious, and a handful of tropes—the asthma inhaler, in particular—give the film a less-than-inspired feel.

But plenty of tense moments and creepy images punctuate the heartbreaking, age-old cautionary tale about getting what you wish for.