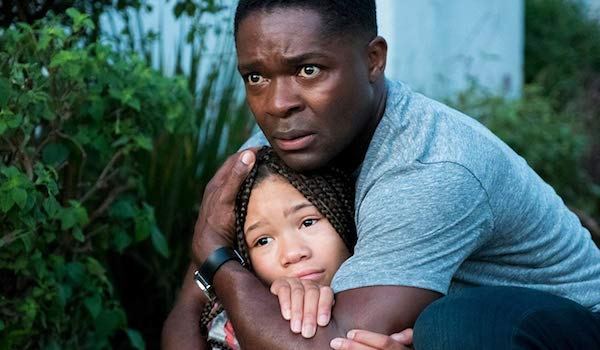 Twenty years ago Jim Caviezel and Dennis Quaid sleuthed across time via a ham radio to solve a serial killer case. But who remembers Frequency?

Jacob Estes might. The writer/director revisits the time loop murder mystery concept with a leaner film in Don’t Let Go.

Estes (Mean Creek – if you haven’t seen it, do so) assembles a shockingly strong ensemble beginning with David Oyelowo (Selma) and Storm Reid (A Wrinkle in Time) and extending through support players Brian Tyree Henry, Alfred Molina and Mykelti Williamson. Together they do what they can to elevate a supernatural thriller too mired in cop movie clichés to take advantage of its unusual premise.

Oyelowo is Detective Radcliff, or Uncle Jack as he’s known to Ashley (Reid), the niece he loves like his own daughter. So when he finds her and both her parents dead, he’s devastated. It isn’t long before he’s receiving phone calls from his dead niece. Together, they try to solve the riddle of her death so they might be able to turn back time.

That’s a tough premise to deliver on without stooping to sentimentality, but Estes rarely makes that misstep. In fact, the film devotes frustratingly little time to the emotional weight of its premise, taking the easy way out repeatedly with cop show shoot outs, ambiguous motives and obvious twists.

Oyelowo (a magnificent actor who needs to choose better projects) commands the screen with a quiet torment that hints at what the film refuses to address: loneliness, guilt, sorrow. Likewise Reid, saddled with far less believable dialog, infuses her character with a believable spunk and charm.

Henry and Molina are criminally underused in a film that’s far too safe and much too rote for its supernatural notes to work. Maybe Estes’s goal was to ground the tale with enough realism to offset the fantasy but he managed to do neither justice.

The result is a blandly forgettable waste of a truly impressive group of actors.