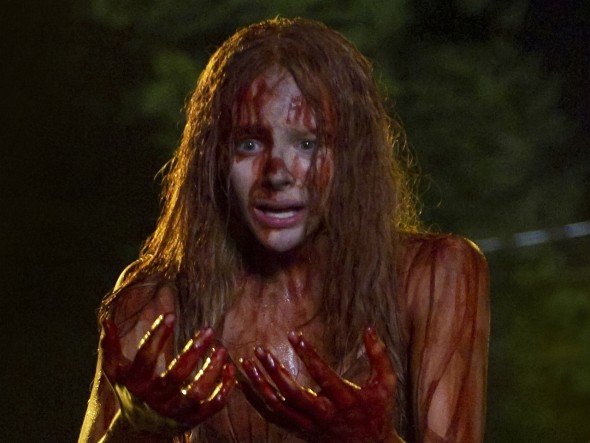 Back in ’76, Brian De Palma brought Stephen King’s first novel, Carrie, to the screen and a terrifying vision of persecution and comeuppance emerged. But that was almost twenty five years before Columbine, and the image of the bullied and confused wreaking bloody revenge at a high school has taken on a different tenor.

That’s no doubt why King’s tale made its way to television in 2002 with a fresh take on the horror. But things in high school have changed again, and the story of Carrie White takes on particular tragedy in a wired time where another innocent high school girl takes her life almost weekly due to bullying. Perhaps that’s what drew filmmaker Kimberly Pierce, whose Boys Don’t Cry also outlines the tragedy that befalls a young woman violently unaccepted for who she is.

In Pierce’s hands, Carrie offers more stripped down drama – none of the scenery chewing of the De Palma original. There’s no humor to be found in the reboot, but realistic performances and updated context give the film enough bite to keep you watching.

Chloe Grace Moretz takes on lead duties as the youngster whose first monthly flow triggers all manner of havoc, from the most unconscionable bullying to telekentic powers. Oh, and her mom tries to kill her. So, not the blessing those Health Ed books try to tell us it is.

Moretz has a big prom dress to fill, and though she has always been a reliable talent, her turn here is unconvincing. Sissy Spacek truly was that innocent, a girl so repressed by her religious mother that she had no conscious knowledge of appropriate social behavior. Moretz is a cute, shy girl the mean kids dislike. It’s not the same.

The always exquisite Julianne Moore actually has an even larger task cut out for her. The role of Margaret White is a juicy one. Even the TV version drew the great Patricia Clarkson to the project. And Moore is characteristically strong, clearly defining the role in a terrifying yet almost sympathetic way. But she’s no Piper Laurie.

Laurie brought such vitality and insanity to the role that the prom became almost secondary, and her chemistry with Spacek was eerily perfect.

The updated context casts a truly saddening shadow over the film, making a major thematic adjustment without even trying. Stephen King wrote a story about hysteria over the dawning of womanhood. But today, the story carries an even darker message. Carrie is a cautionary tale about sending your kids to high school.