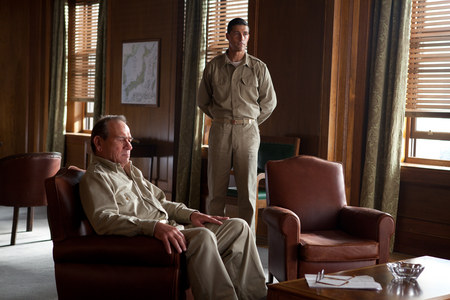 After great films such as Lincoln, Argo and Zero Dark Thirty last year, 2013 has big shoes to fill in the historical drama department.

Emperor, despite the best of intentions, is not a good fit.

Based on the book His Majesty’s Salvation by Shiro Okamoto, the film is set at the end of World War II. Japan has surrendered, and U.S. Supreme Commander Douglas MacArthur has mere days to advise the President on the fate of Japanese Emperor Hirohito.

MacArthur assigns General Bonner Fellers (Matthew Fox) to conduct a quick investigation into whether or not Hirohito should be considered a war criminal, and then in all likelihood, executed.

The story is built around Fellers and his mission, relegating the iconic MacArthur to supporting status. Casting the legendary Jones as MacArthur makes sense, but it only adds to the pressure on the actor portraying Fellers. He must not overshadow the Supreme Commander, yet still craft his own character finely enough to hold your interest.

Neither Fox, nor the script he’s working with, get it done.

While we follow Fellers on his quest to decipher just who deserves blame for leading Japan to attack Pearl Harbor, we end up wondering what MacArthur is up to. It doesn’t help that screenwriters Vera Blasi and David Klass insert flashbacks to a romance between Fellers and a young Japanese woman he met during his college years.

The romance is meant to give you a deeper understanding of Fellers, but it’s so tepid and by-the –numbers it ends up feeling totally unnecessary, a point which is driven home by how quickly MacArthur brushes it off when he learns of Fellers’s possible conflict of interest.

Maybe the most curious aspect of Emperor is that it comes from director Peter Webber, who so artfully crafted 2003’s The Girl with the Pearl Earring. That film emerged as a beautiful period piece, but much of Emperor just doesn’t pass the eye test. From the sets to the clothes, it often looks cold and esoteric, further hampering any emotional connection.

The historical films of last year proved that even though endings may be well-known, great storytelling and inspired performances can result in renewed suspense and emotion.

Emperor just doesn’t have the horses.