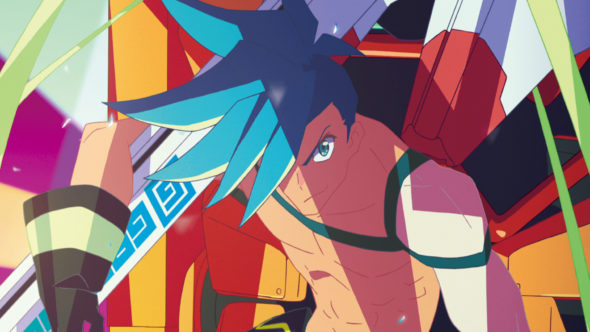 As the first feature-length film from Studio Trigger (the studio behind the well-received TV series “Kill la Kill”), Promare has its work cut out for it. It’s no easy task to maintain the studio’s unique blend of over-the-top yet self-referential action for a tight animated feature.

It’s a coup for director Hiroyuki Imaishi that Promare manages to do all that and more, while fleshing out characters who rise above their archetypes. (Well, most of them.) The film follows the members of Burning Rescue, a civil firefighting team that fights fires caused by “Burnish,” the name given to people who have mutated to spontaneously combust and must continue to start fires to survive.

The action begins 30 years after the first worldwide mutations took place, and most Burnish have been tracked down and imprisoned (or “frozen”). The plot manages to be both convoluted and contrived at various times, but the animation powers the events forward so relentlessly that I stopped caring. The style is wildly entertaining, and with enough hyperactive neon to make Into the Spider-Verse look like a Merchant Ivory film.

Art designer Shigeto Koyama is credited with the character designs. Western audiences are likely to know his work as designer of the robot Baymax from Big Hero 6, and he’s the perfect choice to make sure the futuristic mechas still allow the warmth and relationships from the characters piloting them to shine on screen.

Good thing, too, because without the laugh-out-loud characters and battles, the rest of the sci-fi plot would never make it off the ground. Even here, though, Kazuki Nakashima’s screenplay takes pains to give you permission to sit back and have a good time. He’s not above getting in a few digs at the absurdity: this is a movie, after all, with a literal Deus Ex Machina.

Promare is full of laugh-out-loud moments from the characters and the background animations—there’s a buoyancy that also makes the film a joy from start to finish. The real story behind the Burnish threat gives an unmistakable nod to global warming, but in the world of Promare what matters less is that we save the world (that’s a given, obviously), but rather how essential it is for our shared humanity that we save it by connecting more deeply with one another.

This plays out between the young firefighting hero Galo Thymos and the supposed terrorist leader, Lio Fotia. Here, too, Promare seems to delight in spurning convention: there’s no need for fans to wistfully ship the two adversaries, as the movie clearly does it for us. When the two burning souls connect and discover they must let go of what is holding them back and combust, I think we’re well beyond subtext.

Together, they offer a message of hope drenched in enough sharp, angular colors to fill out a 1990s t-shirt collection. Promare is an exciting first feature outing for Studio Trigger, and a sign that their distinctive brand of frenetic action hasn’t burnt itself out yet.