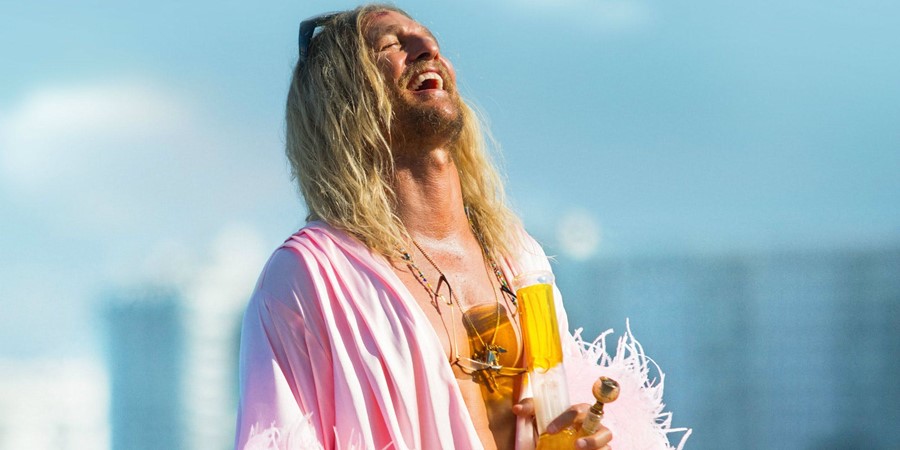 Though it shares much more of the mind-altered DNA found in the works of Cheech, Chong  or S. Thompson, The Beach Bum left me quoting directly from John Hughes.

“You know when you’re telling these little stories? Have a point! It makes it so much more interesting for the listener!”

Writer/director Harmony Korine spent years as the cult auteur behind such WTF classics as Gummo and Trash Humpers, only to go semi-mainstream in 2012 with Spring Breakers, a surprisingly coherent pop culture rumination buoyed by a memorable turn from James Franco.

The Beach Bum‘s star power burns bright courtesy of Matthew McConaughey, which has to be the main reason the film got this size budget, promotion and release. But after watching him party with Snoop Dogg and Jimmy Buffett while wearing women’s clothing for 90 minutes, even the effortlessly likable McConaughey’s welcome wears thin.

He’s Moondog, a legendary gonzo poet who hangs in Key West while his uber-wealthy wife Minnie (Isla Fisher) tends their mansion in Miami. Reality comes calling when the Mrs. cuts off the gravy train, kicking him out and insisting that he dry out and finally write his novel if he wants to regain access to the family funds.

Smoke some weed? Drink some beers? Bust out of rehab and wreak some havoc with Zac Efron? Sure, and maybe write a little bit on that old manual typewriter he drags around.

It’s all drenched in yacht rock (yes, that is “Key Largo” crooner Bertie Higgins), “Boats ‘N Hoes” bad boy style and improvisational freedom, and it makes for a shallow brew with a murky purpose.

Is Moondog’s crazy journey just an after-effect of Snoop Dogg’s special blend, Korine’s final ode to his wild past, or what?

What is clear is that after trying his hand at social commentary with Spring Breakers, Korine wants to have a good time. No doubt he and the cast (also including Johan Hill and Martin Lawrence) had a blast filming it, and good for them.

For the rest of us, though, The Beach Bum is a mildly funny one trick pony, a rambling barfly always cracking up at his own jokes.