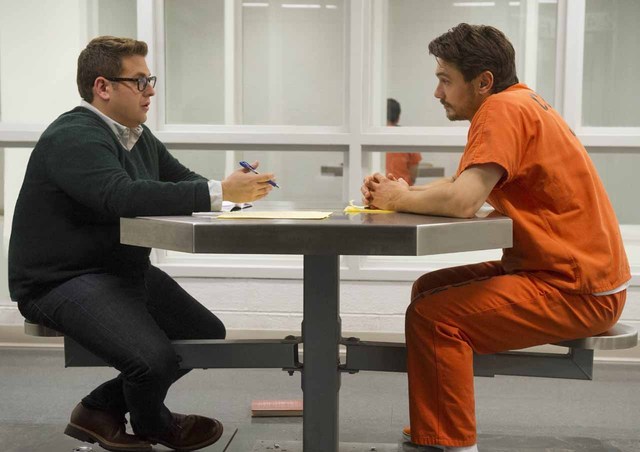 If you see the names James Franco and Jonah Hill together on a marquee and think “comedy,” you’re not alone. But remember, they have Oscar nominations for dramatic turns, and True Story pits them against one another in a deadly serious game of wits.

The film is based on the memoir of the same name by Michael Finkel, a former journalist with the New York Times. After playing loose with some facts in his Times expose on modern day slavery, Finkel was fired in disgrace. After heading back home to Montana and his wife Jill (Felicity Jomes), a strange call from a fellow reporter turned Finkel’s life upside down.

A man named Christian Longo, a fugitive wanted for the murder of his wife and 3 children, was captured in Mexico and found to be using Finkel’s identity.

Finkel follows the story and begins a relationship with the accused killer, each man viewing the other with curiosity and hopes for exploitation. Finkel sees the twist of fate as his ticket back to the big time while Longo wants his new friend to tell his side of the tragic events.

True Story marks the feature debut for director and co-writer Rupert Goold, a veteran of both stage and TV work. He displays a fine sense for big screen visuals, creating effective atmospherics for the frequent jail and courtroom settings, and contrasting them nicely with Finkel’s home base in Montana.

As Longo, Franco gives a finely nuanced performance that keeps you off balance, making it easier to understand how quickly his character forms a bond with Finkel. Hill is not far behind, giving depth to Finkel’s disgrace, and nice subtly to the unintended consequences of his quest for redemption.

Jones is the wild card here. For too long, you’re wondering what her role truly is, and then Jill’s face to face meeting with Longo instantly becomes the film’s emotional high point. The irony is, it is a meeting that didn’t really happen, and that underscores the pesky trouble of True Story.

The film is the sum of interesting parts and often skillfully told, perhaps to its own detriment. The gripping payoff you’re expecting never comes, and you realize sometimes fiction is just more compelling.