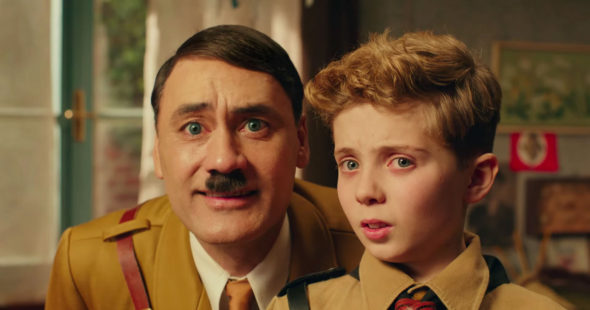 Few other filmmakers would be able to deliver a Nazi dramedy that opens with a German cover of The Beatles’ “I Wanna Hold Your Hand” over the opening credits.

Young Jojo Betzler (Roman Griffin Davis) is a bright and excitable boy. More than anything in the world, Jojo wants to be a good little Nazi. His dream is to eventually become best friends with the Fuhrer himself. Due to his inability to wring the neck of a cute little bunny, Jojo finds himself on the outs with the rest of the young Nazi trainees. Thankfully, Jojo’s imaginary friend, Adolph Hitler himself (played by director Waititi), is there to reassure him, indulge his worst musings, and generally crack wise.

Jojo’s carefree reality, where the war lacks any kind of seriousness, is suddenly changed when he finds that his mother (Scarlett Johannson) is hiding a young Jewish girl (Leave No Trace‘s Thomasin McKenzie) in their home. As the indoctrination of the Third Reich begins to wear off, Jojo comes to realize that the world around him is larger and more complex than he ever knew.

Waititi’s ease at telling stories about the difficulties of growing up isn’t new. His previous works, Boy and The Hunt for the Wilderpeople, dealt with young men coming to terms with life’s hard lessons, and Waititi’s inherent playfulness again allows him to recall the wonder the world holds when you’re young. Anything and everything is possible. Waititi’s same understanding of our humanity grounds the characters inside of these silly worlds he concocts.

Jojo Rabbit asks a lot of its audience. Nazis aren’t supposed to be funny. Anything that even touches how the Jewish people were treated during World War II must be handled with the utmost care. This is the fine line Waititi walks through the entire film, as he manages to acknowledge the horrors of the past while making fun of the perpetrators in the same breath. It’s an amazing feat.

The stacked cast helps carry so much of the film’s burdon. Young Roman Griffin Davis is tasked with making us care about a blonde-haired, blue-eyed Nazi. His fervor is icky, to be sure, but his compassion overwhelms everything else. Likewise, Johannson amazes as Jojo’s mother. She hasn’t played a character this spirited in a long time, and her connection with Jojo serves as the film’s moral center. She abhors what her son wants to be, but also sees through the facade he’s constructed.

Jojo Rabbit, like all good satire, doesn’t pull punches. The film firmly places its finger right in the eye of Europe’s troubling past, but it also manages to show that even amongst the death, bombardment and xenophobia, not everyone gave up their soul to hate.

← Brace Yourself
Insidious →
Scroll Up