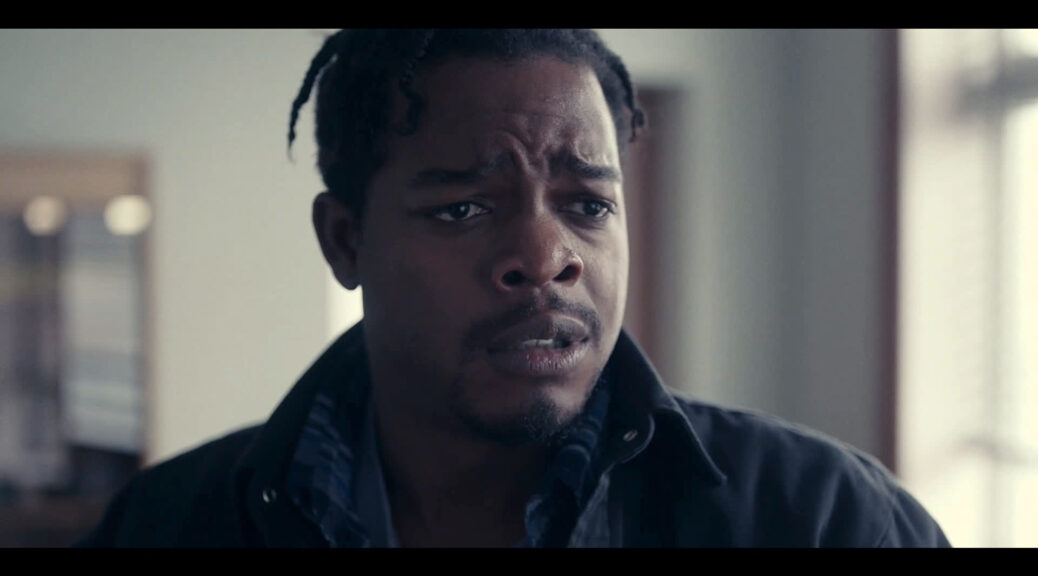 Louis (Stephan James of If Beale Street Could Talk and Race) lives a fairly idyllic existence with his sister, Delia (Genelle Williams), in rural Ohio. Despite having suffered a traumatic brain injury earlier in his life, Louis is mostly self-sufficient – even holding down a full-time job at the local hardware store. Things unravel quickly when Delia tells Louis she’s moving away for work, and the angry Louis wakes up the next morning to find a dead Delia in the kitchen and blood all over his hands.

The plot of Delia’s Gone moves quickly and in surprising directions. What begins as a standard drama quickly morphs into a revenge thriller. By centering around a somewhat volatile protagonist, Delia’s Gone positions itself as one of the more thought-provoking thrillers in quite some time.

So many of these movies are outlets for violent vengeance. Delia’s Gone has its fair share of violent scenes, but they land heavy and with earned emotion. The violence here isn’t gratuitous nor meant to be exploitative. No, Louis’s actions throughout the latter half of the film are in search of something greater: truth.

Director Robert Budreau (Born to be Blue, Stockholm) wisely lets his film lean on an extraordinary cast to propel it forward instead of the “by the numbers” story. Whatever twists Delia’s Gone has are revealed early and without much fanfare. The real surprises come from the characters’ decisions and how they impact one another.

As of late, it’s become quite a welcome sight to see Paul Walter Hauser (I, Tonya, Richard Jewell) show up in any movie. As one of the primary police characters in the film, Hauser plays the role a bit too comedic at times, but the humanity that exudes from the performance is too much to ignore. Hauser brings enough vulnerability to the role for the comedic tics to feel like a by-product of a man reaching for validation.

It’s been nice seeing Marisa Tomei propelled back into the spotlight the last few years due to her involvement with the new Spider-Man movies. Tomei flexes her dramatic chops here, reminding us why she’s an Oscar winner. It’s a role that could have easily been played as stereotypical “hard-nosed cop,” but Tomei injects so much pathos into the performance that it’s hard not to come at her scenes with a heavy dose of empathy.

The real winner is James. He wowed us in 2018 in If Beale Street Could Talk, and his work here is equally impressive. This role could have gone wrong in so many ways. To say that playing a person with a traumatic brain injury is a minefield in 2022 is an understatement, but James approaches the role with sensitivity and nuance. There’s always a sense of the “old Louis” behind James’s eyes – especially in the scenes where Louis is filled with frustration. It’s heartbreaking and riveting at the same time.

By side-stepping many of the trappings of the genre, Delia’s Gone manages to come out on the other side as a thoughtful examination of searching for truth and forgiving one’s self.