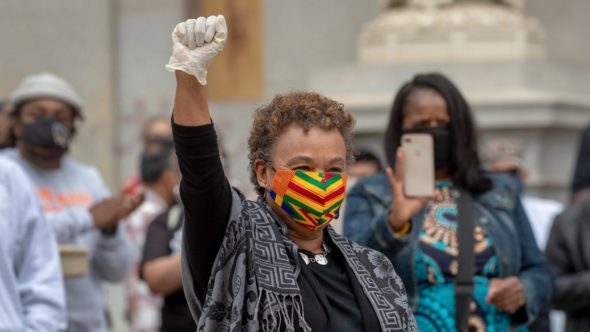 Barbara Lee hasn’t become a household name like Nancy Pelosi, Maxine Waters or Alexandria Ocasio-Cortez. Despite her minor anonymity on the national political stage, the film puts a spotlight on how Lee has managed to get meaningful legislation passed while holding onto her core beliefs. It’s part of what has made Lee so endearing to her constituents, other House members and senators, and to her own family.

So much of the early portion of Speaking Truth to Power focuses on Lee’s solitary post-9/11 vote against the Authorization for Use of Military Force Against Terrorists. By being the lone member of the House of Representatives to vote against the Act, Lee put a target on her back during a fraught time in American politics. Through leaning into this part of Lee’s life so early in the film, Director Abby Ginzberg sets the stage to show how the Congresswoman has always been that principled in her morals and convictions.

Of course, the film is chock full of glowing testimonials from the creme de la creme of American political and activist life: John Lewis, Van Jones, Cory Booker and Danny Glover, just to name a few. These vignettes never threaten to overtake the film, but add flavorful bits to Lee’s ongoing story from childhood through her career in Washington.

The real meat and potatoes of the film comes from Lee herself. So much of her story is told from her point of view as the filmmakers follow her from Washington, D.C., to her district in California, and even back to El Paso, Texas, where she grew up in the shadow of Jim Crow. The personal side of Lee’s story isn’t given the same attention that her professional side is, and that feels almost by design. Lee isn’t shy about her struggles as a single mother, or the failings of past relationships. But she isn’t looking to let those past hardships define her either.

By the end of Speaking Truth to Power, it’s apparent that Barbara Lee deserves to be included in the pantheon of those aforementioned household names. Not for her political shrewdness though. No, Barbara Lee should be remembered for her convictions.