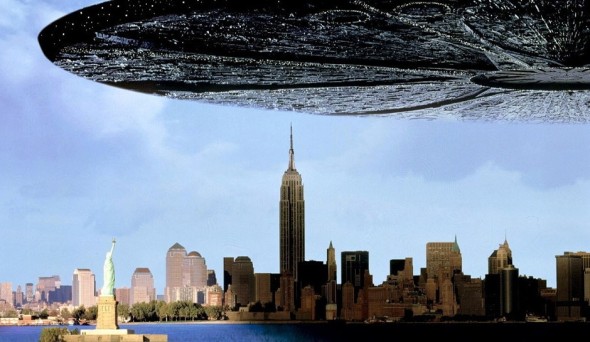 Have you ever seen a fast food commercial where the burger looks fantastic, then you get there and it’s basically day old dog food on a flattened-out bun?

Say hello to Independence Day: Resurgence, a preposterous, tedious filet of sequel churned out with all the joy of a kid’s meal minus the toy surprise.

It’s been twenty years since the “War of 1996,” and banding together to beat back the alien horde has brought the entire would together in a hand-holding singalong of peace. Things are good, made even better by the advances that came from getting a look at all that high-flying alien technology.

His daughter Patricia (Maika Munroe) is engaged to Jake (Liam Hemsworth), a hotshot pilot who lives on the edge! We know this because he’s told “You’re grounded!” barely five minutes in. You think that’s gonna stop Jake when shit gets real? Ha, he laughs in your general direction! Jake and fellow pilot Dylan (Jessie T. Usher) have a serious beef, so it’s a total surprise when they have to put all that aside and crack wise as they fight the next alien invasion.

Hey. it’s summer, there’s nothing wrong with wanting to eat some popcorn and watch aliens explode, but Resurgence is proof than more can definitely be less.

Director/co-writer Roland Emmerich returns from part one, determined to re-create as many scenes as he can and up the ante on ships, aliens, and overall bombast.

The script is often groan-inducing, highlighted by lines no more subtle than “You’re the only family I got!” and the appearance of a helpful African warlord who can read the alien alphabet.

Just when you’re thinking (hoping) this might actually be a sequel to Mars Attacks! Whitmore delivers another “We’re going to live on” speech amid the swelling strings and waving flags and you’re right back on planet lazy

Independence Day was no classic, but it was fun, something Resurgence couldn’t spell if it gave an F.

Subscribe in a reader
← California Dreaming
Shark Sandwich →
Scroll Up