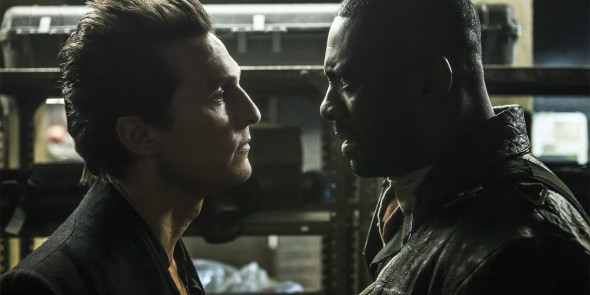 So, there’s this tower, see. And it sits at the center of all the parallel worlds of the universe and as long as it stands, it keeps the monsters away. Why? How did it get there? No time!

Anyhoo, an evildoer (Matthew McConaughey) wants to knock it down, let in the monsters and rule it all. But there’s this kid – you know what, let me not summarize what amounts to little more than a summary in the first place. Suffice it to say, The Dark Tower is not very good.

There are a lot of bad Stephen King movies. But even Dreamcatcher, The Night Flier and Sleepwalkers (three of the worst) offered a sort of B-movie charm. The Dark Tower is not even the fun kind of bad. It’s tedious, lumbering and schmaltzy, visually unappealing, narratively embarrassing and a woeful waste of Idris Elba.

McConaughey, on the other hand, makes the most of his time onscreen as Walter – which is a much funnier name for the prince of darkness than Man in Black. As the antagonist, he brandishes a restrained evil and moves with a little swagger, plus there’s that wig. Glorious! Real Shatner – hell, even Travolta-esque.

But McConaughey and Elba – true talents, no doubt – are hamstrung from the beginning by the production’s meat-cleaver-and-band-aid approach to screenwriting.

Nobody is more convinced than I am that Stephen King uses too damn many words. Too damn many! Succinct he will never be. But to believe you can boil his multi-volume, many-thousand-page Dark Tower series into a coherent 90 minutes is just brazen idiocy. No offense to the team of writers working on the adaptation – some of whom have talent; the other one is Akiva Goldsman.

Director Nikolaj Arcel (A Royal Affair– also credited with writing) is zero help, managing to take this Cliff’s Notes version of King’s prose and still produce something bloated and slow.

I remember reviewing the Tom Cruise debacle The Mummy earlier this year and thinking, this isn’t even any fun, it’s just bad. Dark Tower makes The Mummy feel like a rollicking good time.

But, hey, the trailers for It look great, don’t they?