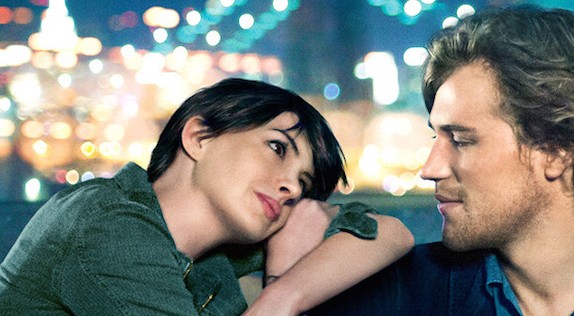 Song One is a lot like the indie folk music that permeates it: pleasant, well-intentioned, and a bit bland.

Anne Hathaway stars as Franny, an anthropology student working overseas who must rush back home to New York after a family tragedy. Her brother Henry, an aspiring musician, is struck by a cab while walking in traffic, and Franny returns to find him in a coma, fighting for his life.

Searching Henry’s apartment for familiar items that might help revive him, Franny finds concert tickets to see a folkie named James Forester (Johnny Flynn). She attends the show, and waits in the autograph line to tell Forester about her brother’s admiration for him. The conversation sparks a sweet friendship, and James is soon visiting Henry and hanging out with Franny and her ex-hippie mom (Mary Steenburgen).

Will friendship turn to romance? Will James find inspiration to cure his songwriter’s block? Bet you can guess.

It’s the debut feature for writer/director Kate Barker-Froyland, and predictability is not what ultimately keeps Song One from resonating. Yes, the terrain is plenty familiar, but this love letter to the power of music suffers most from contrivance and precious few powerful moments.

Flynn’s performance is tender but tentative, and though is he obviously a talented musician, the original songs elicit little more than the nod you give that guy at a party who suddenly finds a guitar. He’s in way over his head alongside Hathaway, who dials it down but can’t keep her natural talent from casting a big shadow over her co star.

There is some promise here. The film is well shot and Barker-Froyland often seems to sense how thin the drama is, pumping it up with enough good intentions to keep any eye-rolling at bay. When her storytelling talent catches up with her technical skills, then she may have a hit on her hands.