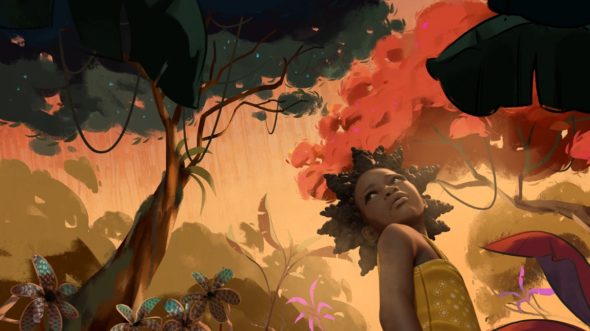 That girl is Liyana, a fictional character brought to life by the children living at Likhaya Lemphilo Lensha, a home for orphans in Swaziland.

During a storytelling workshop at the children’s home, author Gcina Mhlophe guides the boys and girls through exercises that allow them to imagine a collective story. Together, they weave a tale of a young girl facing enormous challenges.

Directors Amanda Kopp and Aaron Kopp focus primarily on five children, Phumlani, Nomcebo, Sibusiso, Mkhuleko and Zweli; their voices are the ones we hear throughout the film. By keeping these five at the center, we’re given a chance to get to know their personalities. Each tells the story in their own way. While the plot is the same, the details are unique to each child.

As the creative narrative unfolds, the audience is given glimpses into the lives of the children at Likhaya Lemphilop Lensha. We learn that many of the details of Liyana’s life reflect the children’s realities. HIV takes both of Liyana’s parents; her twin brothers are kidnapped in the dead of night by three vicious men. But Liyana faces each tragedy with determination; her hope and her fearlessness reflect the inner feeling of the children telling her story.

Liyana’s story is brought to life through a combination of the children’s words and gorgeous illustrations that animate the narrative. The film’s strengths lie in this weaving of the day to day realities of life with the vibrant story the children narrate.

The film’s most moving moments are when we’re allowed to spend time with the children. Watching them work in the garden, herd cattle, dance and play games is when the documentary shines. Though the children’s story is wonderful, it might have been a more powerful film if the directors had struck a better balance between fantasy and reality.

However, the indomitable spirit of children is the heart of the film. All of them have faced adversity, sadness and despair, but each has hope and it shines throughout the documentary. Liyana celebrates that wondrous courage.