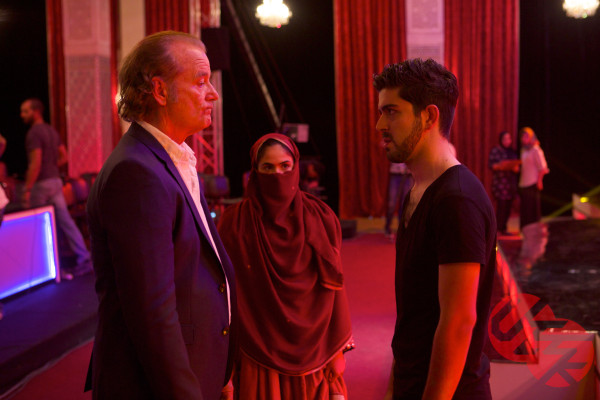 It’s been nearly forty years since Bill Murray’s Nick the Lounge Singer crooned on SNL. Wouldn’t it be a kick to check in and see how life has treated Nick Ocean?

Rock the Kasbah could have been that movie. Too bad, because instead we get a few solid moments of Murray lunacy amid the wildly unfocused whitewashing of one courageous woman’s journey.

Murray is Richie Lanz, a struggling L.A. talent agent who catches a break when his client/secretary Ronnie (Zooey Deschanel) gets booked on a USO tour…in Afghanistan. Ronnie quickly regrets entertaining in a war zone, so she hires local mercenary Bombay Brian (Bruce Willis) to get her out of the country post haste.

While Richie is trying to figure out a way home himself, he’s befriended by a native cabbie (Arian Moayed), the local hooker with a heart of gold (Kate Hudson), and two crazy ammunition peddlers (Scott Caan and Danny McBride).

It’s all silly, contrived and only mildly amusing, but when a job offer from the ammo guys takes Richie to Pakistan, he hears the young Salima (Leem Lubany) singing and instantly decides he needs to introduce her to the world.

Richie is told singing in public would bring a death sentence for Salima, but she stows away in his cab back to Kabul, and defiantly auditions for the TV show Afghan Star.

It’s all built around real events in the life of Setara Hussainzada, who still faces death threats after revealing her face and competing on Afghan Star. Her story has been told in two documentaries – 2009’s Afghan Star and 2010’s Silencing the Song – and is certainly deserving of a serious dramatic treatment. Though she does get a nice acknowledgment before the credits, screenwriter Mitch Glazer and director Barry Levinson are more interested in the “white savior” angle and creating a comedy vehicle for Murray.

Characters disappear at will, plot lines are invented and ignored, no one really seems interested, and the Kasbah is left more bored than rocked.