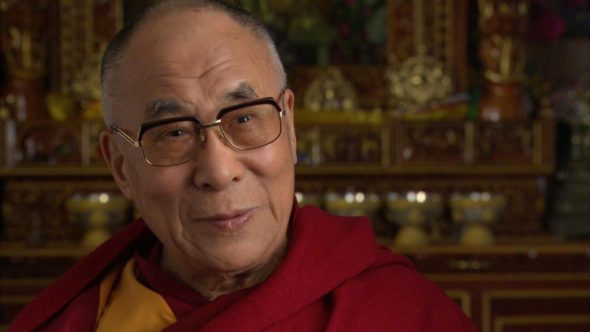 People around the world generally know something about the 14th Dalai Lama. Whether you know him as a religious figure, political refugee, or something else entirely, director Dawn Gifford Engle wants to highlight another aspect of the Dalai Lama – scientist.

For over thirty years, the Dalai Lama has hosted talks with some of the world’s leading scientists. From George Greenstein (cosmologist) to Francisco Varela (biologist and neuroscientist) to Steven Chu (physicist), the Dalai Lama has opened discussions, facilitated new ways of thinking, and highlighted similarities between western science and Buddhist science.

Most, if not all, of these meetings with scientists were recorded, so Engle has a wealth of footage to use to tell this story.

Unfortunately, this is largely where the documentary falters. With all this footage, the film spends too much time trying to help the audience understand the basics of fields like cosmology, quantum physics and biology. Unless one is particularly keen to learn about these topics, the documentary becomes tedious. It fails in its primary purpose of underlining the ways in which the Dalai Lama has contributed his understanding to these subjects. Most of these scenes focus on the scientist of the moment, animating his words with simple graphics, while the Dalai Lama listens intently. Most of what is learned through these scenes is that His Holiness is a good listener (admittedly a good trait to possess).

The film is also guilty of meandering as it digs through thirty years of footage. Early on, there is a brief section explaining the war between Tibet and China that led to the Dalai Lama’s exile in India. Some beautiful animations appear in the first ten minutes of the film, showing some of the moments in the Dalai Lama’s young life that made him interested in the universe. Those animations are discarded too early – an unfortunate decision, as they are some of the most effective moments.

The film does remind us why the Dalai Lama is admired around the world. He is a champion of using science to improve the world for all conscious beings, he advocates scientific understanding for all (it is a requirement of monks in their monastic training), and he stands as a reminder that religion and science can go hand in hand.

These are a few of the lessons worth learning within this disjointed documentary.