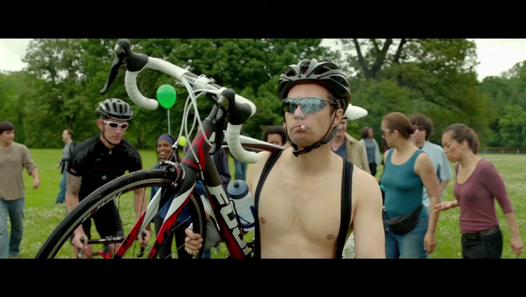 For a film about drug use, extramarital sex, feces smearing and conspiracy to commit murder, Better Living through Chemistry retains a surprisingly cheery disposition throughout. In its own way, it also champions wholesome values, all without ever really condemning the extramarital relations, drug use or attempted murder. It does seem to frown on that excrement thing, though, so there are lines it is willing to draw.

Wilde and Rockwell share a fun, edgy chemistry while Michelle Monaghan, playing Varney’s ball-busting wife, steals her every scene. (Stealing a scene from Sam Rockwell is a noteworthy feat.) The three are a blast to watch. They have a lot of fun with the pseudo-subversive silliness and are entirely responsible for whatever enjoyment there is to find in the film.

Too bad the writing/directing pair of Geoff Moore and David Posamentier offers the acting trio too slight a script, as well as tone deaf direction. And their narration device is far less clever than they think.

The film lacks the bite of a true satire or dark comedy. If the point was one of consequence-free binging, the film would actually have been on better footing in that at least it would have been provocative. Instead, it’s a hollow exercise in finding your inner strength through drug-induced misbehavior, and then allowing convenient scripting to help you know when to say when.

One thought on “Sam Rockwell Wants to Party with You”