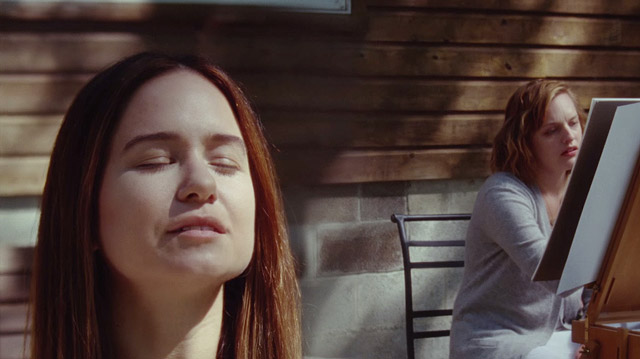 Don’t bother trying to guess where Queen of Earth might be going, you’ll miss the beauty of getting there.

It’s a wildly enigmatic take on the dynamics of female friendship, ambitiously (and surprisingly?) told by writer/director Alex Ross Perry, who laces the character studies with descents into madness and subversive humor.

Catherine (Elisabeth Moss) is reeling from a traumatic breakup that hit not long after her father’s death. Her longtime friend Virginia (Katherine Waterston) offers the family lake house for some girl time, much like their getaway a year earlier when it was Virginia who was suffering.

As the women meet at the picturesque setting, it is clear they have grown apart from their days as BFFs, and Perry is no hurry to tell you why. Catherine’s ever-present sketch pad is an apt metaphor for the narrative structure at work here. Perry utilizes extreme closeups, shaky cameras, out of focus shots and quick fades to provide beautiful glimpses into a complicated relationship.

Slowly, the often combative dialogue and the out of sequence flashbacks provide some possible answers, even as more questions are raised. With a Gothic soundtrack and a constant sheen of despair, you begin to wonder if Perry’s vision will ultimately include a murderous rampage.

But that would be too easy, and a betrayal of all that’s been building. Perry presents a perceptive tableau of emotions, all driven home to perfection through wonderful performances from his leads. Moss is downright electric, rolling through a spectrum of emotional outbursts and withdrawn silences with an authenticity that leaves you nervous to look away. Waterston may have the more “straight woman” role, but she gives Virginia a steely resolve that grounds the film, and invites curiosity into her side of this story.

Perry (The Color Wheel, Listen Up Philip) makes the comedy less overt and the psychological warfare more pointed this time out, but his familiar elements remain. Queen of Earth brings unlikeable characters who struggle with alienation, disenchantment and dangerous depression, and leaves you glad you didn’t pass on the chance to spend time with them.