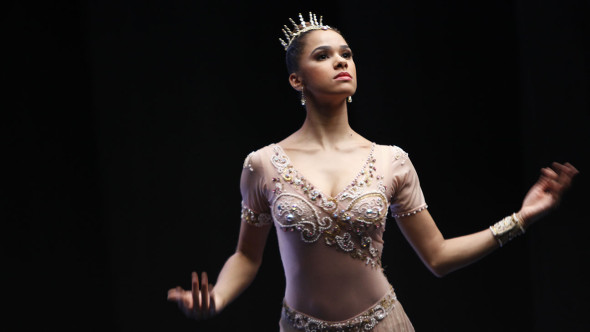 Misty Copeland has a fascinating story to tell. Unfortunately, director Nelson George is the one telling it. From the title to the structure, from the focus to the finale, A Ballerina’s Tale is a needlessly homogenized package of what could have been an amazing film.

Earlier this year – this year! – Copeland became the first African American prima ballerina in the 75 year history of the American Ballet Theater.

Why did it take so long? What did Copeland possess to not only reach the absolute height of her craft, but to overcome classical ballet’s longstanding prejudices about body type as well as skin color? Where did she come from? How did she get here?

If you’re looking for answers to those questions, well, this is not the film for you.

To a certain degree, George seems to understand the historical significance of Copeland’s achievement. He deserves credit for spending time talking with Copeland and even more insightful voices about the staunchly white face of ballet. He also devotes attention to the unhealthy physical aesthetic imposed on ballet dancers, as well as the punishment their bodies take. He just doesn’t really help us see how these things relate to Copeland or her struggles.

George meticulously avoids coverage of Copeland’s difficult childhood and rocky road toward dance, perhaps to keep the focus on challenges she faced once she’d made it to ABT, but in doing so he sketches too vague a picture of the courage and talent she needed to excel as she has. And though he mainly films during the period where she struggled to overcome a potentially career ending injury, he remains so removed from her trials that he sucks all drama from the events.

This is not really the story of a changing paradigm in classical ballet – there’s not enough history or enough documentation of contemporary impact to make that claim. It’s certainly not a clear version of Copeland’s personal journey toward the pinnacle of her career. It’s not even a dance movie – aside from a handful of snippets, we’re provided no real footage of Copeland’s skill as a ballerina.

The struggles, triumphs, and historical significance of Misty Copeland’s life story has all the drama of a great movie. Too bad A Ballerina’s Tale does not.