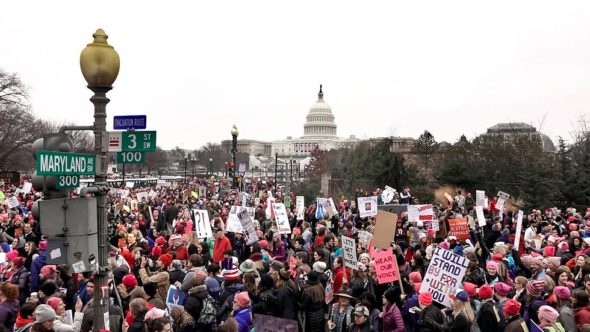 It’s been a hell of a year.

Not only will 2020 live in infamy as the year we grappled with a worldwide pandemic, it is also the year Trump faces a reckoning in the United States. Will he be voted out of office? Or will he secure a second term?

As unlikely as a second term might sound to some, director Cheryl Jacobs Crim doesn’t want her audience (likely those opposed to Trump and his agenda) to become complacent. With her film, Resisterhood, she reminds us why people, particularly women, are fighting the Trump agenda.

On Day 1 of Trump’s presidency, as many as 500,000 women, and men, descended on the nation’s capital for the Women’s March – a gathering that let the new president know he was on watch.

And as the days of Trump’s presidency progressed, he was indeed being watched. As every devastating and harmful decision was passed down, protestors lined the streets around the country to declare this was not their America. From the People’s Climate March on Day 100 to the United We Dream protest on Day 231, Crim documents it all.

Crim captures the feelings surrounding these moments by interviewing women and men who are part of the resistance. From psychologist Jean Graber, who is following in the footsteps of her grandmother – suffragette Edith Hooker – to Egyptian immigrant, Mimi Hassanein, who ran for office in her community, to Illinois Representative Luis Gutiérrez, Crim intersperses these interviews with scenes of protests, primarily in the nation’s capital.

The movie runs pell-mell through the actions and reactions of Trump’s presidency. At times, when reminded of everything Trump has realized as president, it’s hard not to feel dejected. However, many of the women Crim interviews are still hopeful. More and more women, minorities and young people are participating in the democratic process – either in the streets, at the ballot box, or as political candidates.

But there is a reminder that complacency is the enemy. It would be easy, worryingly easy, to topple our democracy, and while Resisterhood is steeped in the culture surrounding our current political climate, it has a timeless message.

If you want to effect change, you must participate. If you need a reminder that your vote, your voice matters, start with Resisterhood.

Subscribe in a reader
← Home A Clone
Unexpected Turns →
Scroll Up