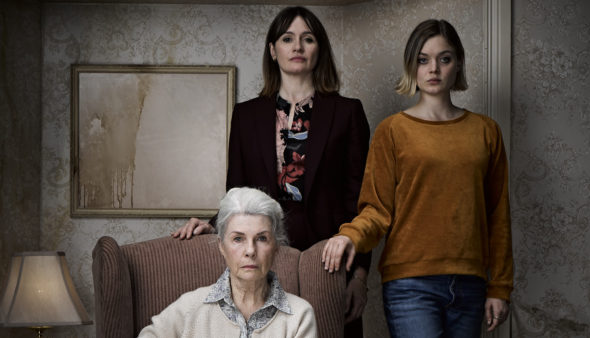 Many a film has used a building—a haunted house, for instance—to represent the mental state of a character. From Shirley Jackson to Stephen King to Daniel Kehlmann, writers have lured us into perfectly lovely structures only to hold us inside, our ugly thoughts manifesting as danger, our madness creating a labyrinthine, Escher-esque trap.

Such is the case for Relic, a compassionate but clear-eyed look at a different type of hereditary horror.

Edna (Robyn Nevin) has been missing for at least three days. Her daughter Kay (Emily Mortimer) and her granddaughter Sam (Bella Heathcote) move into Edna’s place to keep an eye out for her while local police investigate.

And then, there she is, and it’s entirely likely she never even left the house.

Well, that can’t be—unless there’s something seriously weird about this house.

Co-writer/director Natalie Erika James keeps her metaphor right at the surface of the film. That keeps Relic from ever truly terrifying, honestly. There’s no simultaneous pull that something supernatural is afoot. But the sense of dread takes on a whole new tenor, and the film’s horror is honest as it hits on an emotional level.

Nevin does an admirable job with Edna, creating a fully dimensional character, one who’s tough enough that when she becomes vulnerable, it comes as a jolt.

Mortimer and Heathcote strike a believable love/disappointment/blame balance and the emotional tug of war among the three women rings sadly true.

There’s not a lot of depth to this story. Relic isn’t hiding its themes—there are no subplots or red herrings, and the a-ha moments that allow Sam and Kay to piece together the mystery of Gram’s troubles feel almost perfunctory.

But James doesn’t shy away from the ugliness, guilt, anger or grief that fuel relationships tied up in this particularly painful genealogical horror. With its evocative analogy, Relic shows us what we are really afraid of, and it isn’t ghosts.