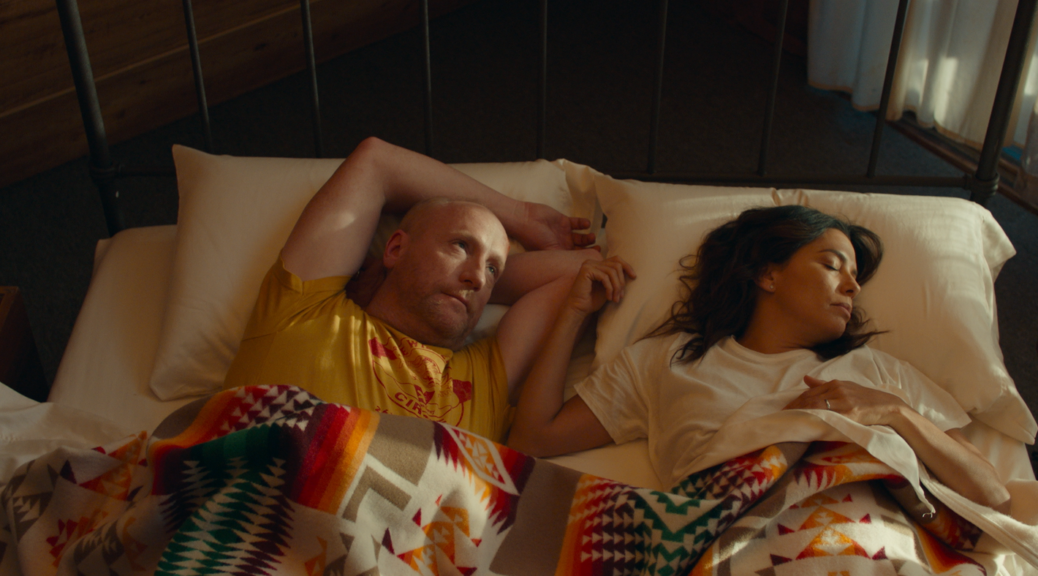 When his UPS delivery driver unexpectedly dies, Dan (Matt Walsh) decides it’s time he and his wife “unplug” and reconnect with each other.

With Unplugging, co-written by Walsh and Brad Morris, director Debra Neil-Fisher attempts to find humor in a couple so plugged-in that a weekend without cell service becomes a disastrous nightmare.

The premise of the movie is applicable to plenty of people. Who doesn’t know someone who’s practically married to their phone? In this case, that’s Dan’s wife, Jeanine (Eva Longoria). The demands of her office are such that she’s typing emails and sending Jib Jabs at 3 am.

Dan and Jeanine’s daughter is just as connected as Jeanine, but this is apparently not a problem. Dan’s tech-free weekend getaway is just for Mom and Dad. His daughter, still looking at her phone as she says goodbye to her parents, is left behind with her grandmother.

Walsh and Longoria are adept at comedy, but the script never gives them anything to work with. Gil (Keith David) runs the local place where the only thing worth eating is the enchiladas, but the spot is so dead that Dan and Jeanine are his only customers. At least, until Perkins (Lea Thompson) shows up.

Thompson and David also have a knack for comedy, but David is underutilized, and Thompson’s drone-tracking, government-conspiracy-spouting rural nut is too over-the-top to land any jokes. Neither character make a lot of sense in the grand scheme of things, except to criticize rural people as “out there.” Perkins’s pet raccoon Lulu only belabors this point.

The film is unclear about its message. Is tech a bad thing? Or is it okay in moderation? Does getting lost in the woods make you appreciate your tech more, or less? Will a person’s constant disconnection from the “real” world make them suspicious of their neighbors? Or are your neighbors worthy of your suspicion? (If they live in the country, the answer seems to be yes.)

Like its characters, Unplugging gets lost about halfway through and never finds its way back. That it’s light on the humor only makes it harder for those of us who unplugged to watch the movie to keep our hands off our phones.