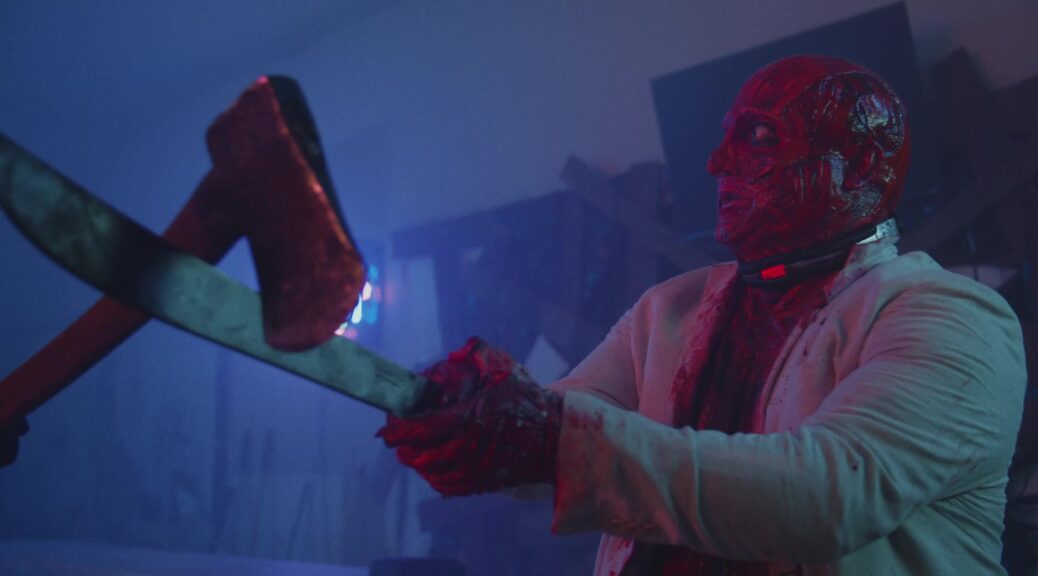 Three years ago, Aaron B. Koontz delighted die-hard horror fans with the squishy, oozy, gory mash note to the video store, Scare Package. It was an anthology of horror shorts, and those only tend to work if they have a compelling frame. In this case, each short represented a film on the shelf at Rad Chad’s Horror Emporium.

For the sequel, Scare Package II: Rad Chad’s Revenge, survivors from Part I regroup for Rad Chad’s funeral. But they find themselves trapped by a sinister mastermind with deadly games they must play if they hope to make it out alive.

Why do they watch the short films? That’s less clear this go-round, but the shorts they do watch are all pretty solid.

Both Alexandra Barreto’s Welcome to the Nineties and Anthony Cousins’s The Night He Came Back Again! Part VI: The Night She Came Back – like Koontz’s framing story – rely on your knowledge of horror tropes to generate laughs. Barreto’s film has some of the sharpest insights via dialog as it celebrates the changing of the “final girl” guard once the grunge-and-garage era took hold.

Rachele Wiggins’s We’re So Dead is a fun Aussie adventure, part Stand by Me part Re-Animator, with a wry delivery. Like all the other shorts in the program, We’re So Dead offers metacommentary without surrendering its standalone charm.

For Special Edition, director Jed Shepherd sets a handful of friends in a lighthouse for the night with a one-of-a-kind video. But what is the film, exactly? As one woman obsessively rewinds, fast forwards and pauses, her friends are the ones making the big discoveries.

Nods to Aliens, Black Christmas, Halloween, Friday the 13th Part 5, A Nightmare on Elm Street Part 3, Hellraiser, Saw and more flavor the product and mark its makers as bona fide fans. You may have to be a fan of Scare Package to appreciate Koontz’s framing story because it picks up not long after the first left off, without explanation. Being in on the joke, as always, makes the gag more satisfying. But that’s the basic premise of every story told in this collection.