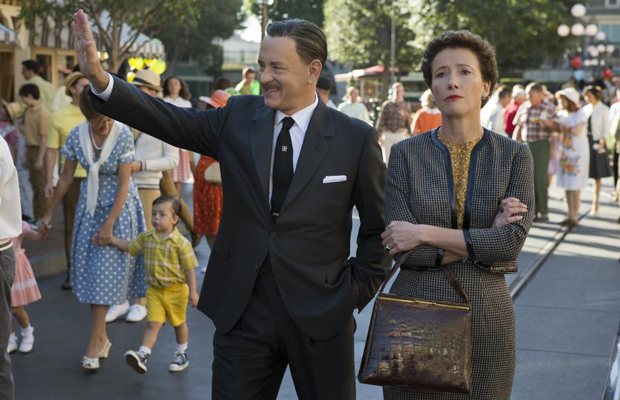 The God of Irony must be smiling on Saving Mr. Banks, the “Disneyfied” account of a legendary author afraid the film version of her greatest work would get… Disneyfied.

Leave it to a pair of reliably great actors, and the memories of one of Disney’s most treasured classics, to make sure the whole affair turns out much better than a black fly in your Chardonnay.

Emma Thompson brings wit and humanity to the role of P.L. Travers, who for years rebuffed all offers from Walt Disney himself to turn her Mary Poppins stories into a movie. Tom Hanks plays Mr. Disney with the charming twinkle you’d expect, and from their first scenes together, he and Thompson exhibit a playful, unmistakeable chemistry that buoys the film.

The fact that Saving Mr. Banks is as enjoyable as it is feels like an underdog snatching victory from sure defeat.

The script, from Kelly Marcel and Sue Smith, takes (according to numerous accounts) many “feel good” liberties with the story of how Mary Poppins came to fruition. Even worse, the director is John Lee  Hancock, the man behind The Blind Side, a downright criminal piece of whitewashing if ever there was one.

Together they fill the backstory of Travers’ troubled childhood with force-fed melodrama, attempting to pull every manipulative heartstring available. Though given less screen time, the treatment of heartbreak in Walt Disney’s own past is equally subtle.

But, in addition to the sublime lead performances and a strong supporting cast, Saving Mr. Banks has a powerful trump card:  Poppins!

Each time the music and writing team (Jason Schwartzman, Bradley Whitford and B.J. Novak-all stellar) show Travers a proposed storyboard or play her a new song, you can’t help but smile. Finish up with classic footage from the 1964 film and still pics from the actual premiere, and it’s pretty hard not to surrender to the guilty pleasures.

Those without an affinity for the source material may not get the same warm feelings, but adding schmaltz to their own story of schmaltz-adding is perverted Disney genius. That, along with the well-played nostalgia for one of their greatest achievements, just might make Saving Mr. Banks the quintessential Disney film.