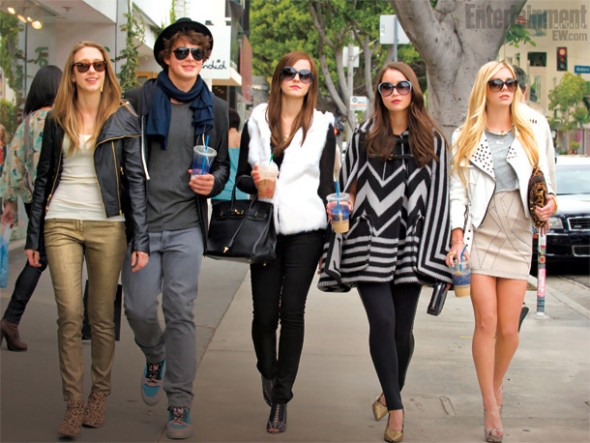 My son has lived in L. A. for almost a year. It took him all of two weeks as a Southern California resident to report, “Everyone here is so phony.”

Imagine growing up in that environment, and you might start to understand the treatment that The Bling Ring gives to some clueless teenage criminals.

In the late 2000s, a group of five Cali teenagers began burglarizing the homes of celebrities they admired, including their favorite “fashion icons” such as Paris Hilton and Lindsay Lohan. All told, the gang swiped about three million in cash and property before the popo caught up with them.

Writer/director Sofia Coppola, who of course did grow up in this environment, establishes the setting with the ease you would expect. It is a Petri dish of vapidity, so lacking in substance that one teen seems genuinely proud of the depth of thought displayed in his stated ambition to “have my own lifestyle.”

The line that Coppola walks so effectively is one that allows her to keep both sympathy and judgement at arm’s length. The mistake would be to equate the frivolity of the story with a lack of substance in the film itself. Yes its light, but there’s ironic fun to be had, and a pair of fine performances to appreciate.

As Rebecca, the group’s ringleader, Katie Chang perfectly embodies the blinding self-absorption of a young lady who simply cannot imagine anything wrong with always getting what she wants at any given moment.

And Emma Watson, taking a major step toward shedding her image as Hermione from Harry Potter, is fantastic as Nikki, who personifies her fame-obsessed culture by viewing a very public arrest as a springboard to running a major charity organization…”or perhaps a country.”

Though it marks a stylistic shift for Coppola, you can see how this crime story spoke to her. In films such as Lost in Translation and Somewhere, she examined fame introspectively. The kids in The Bling Ring got no time for that, but Coppola makes them oddly fascinating.

← Counting Down with Pride (and Jon Theiss!)
Escaping the Summertime Blues →
Scroll Up