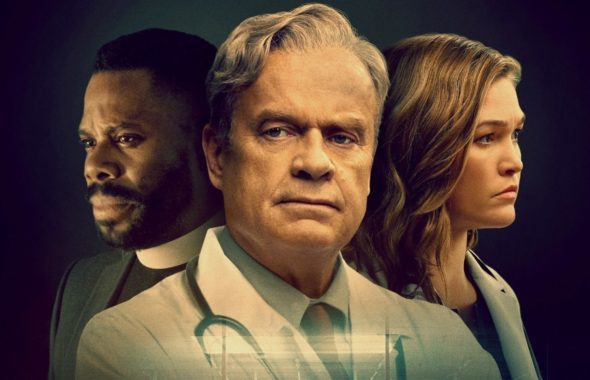 Based on the play by Mark St. Germain and adapted for the screen by writer/director Austin Stark, The God Committee seeks to provide insight into the fraught decisions behind who lives and who dies when it comes to organ transplants.

A new heart is recently available for the St. Augustine Hospital, a building in disrepair and under renovation, and the transplant committee convenes to decide who among three matches is the worthiest to receive the heart. The committee has a paltry 90 minutes to make their decision or else the heart will be useless.

The initial set-up alone is worthy of an entire film, but the movie isn’t satisfied to stay within the confines of a sterile boardroom. The timeline jumps forward seven years to check-in on our committee, primarily Dr. Andre Boxer (Kelsey Grammer), and how the implications of their decision on that fateful day have affected them.

By moving back and forth between the past and present, the tension of those crucial 90 minutes is often interrupted. However, by weaving the present into the past, we get to know the people behind these decisions.

Grammer excels on screen as the pragmatic Boxer, basing his judgments on the medical data rather than emotion. As his foil, Dr. Jordan Taylor (Julia Styles) relies on her heart to guide her decision-making. Unfortunately, Styles can’t quite match the passion of Grammer. The other members of the committee, which include Janeane Garofalo and Colman Domingo, aren’t given as much to work with and don’t resonate on screen in the same way.

The play lends itself well to film, and Stark handily adapts the source material. There are a few moments that remind us this is an adaption of a play – mainly, characters who talk to the screen. This might have worked better had it been transitioned from audience-directed monologue into character-driven dialogue, as it would have heightened the conflict inside the boardroom.

The film touches on numerous thematic issues: the ethics of deciding who is worthy of a transplant, the conjunction of corporatism and life-saving medical research, the inequity of medical care across racial and class lines, black market trade in organs, etc. Unfortunately, The God Committee never settles on any of them, careening across multiple threads without any direction.

If the movie had stuck to a theme and a timeline, it might have been more impactful.