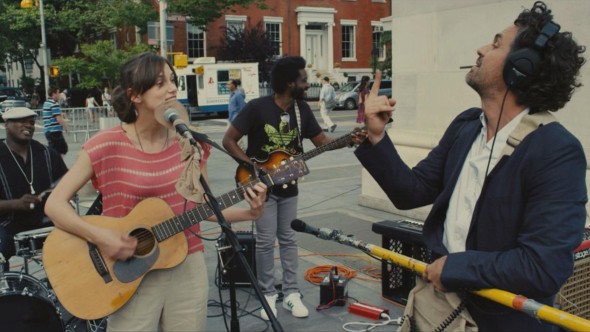 Okay, let’s talk about Begin Again without mentioning that other movie that it will really remind you of…

You’d be tempted to call it “Once for the multi-plex” even if you didn’t know both films come from the same writer/director, John Carney.

In 2006, Carney’s tender, heartfelt treatment made Once a wonderful tale of two musicians in Ireland telling their love story through song. It became an indie hit that won an Oscar and spawned a popular stage musical, but now it seems Carney wants to trade nuance for bigger box office while his new characters disavow musicians who do just that.

He moves the musical setting from the streets of Dublin to the boardrooms of New York, with Mark Ruffalo starring as Dan, a well-known record executive who’s career has seen better days. He stumbles into a bar just in time to hear Greta (Keira Knightley) being coaxed onstage to sing an original song,

Dan instantly hears a hit, and wants to record her, but Greta is gun shy. She’s still hurting from her breakup with Dave (Adam Levine), who has left her behind and become a superstar with soulless pop versions of her songs.

Greta agrees to a demo CD but there’s no budget to speak of, so they decide on a musical tour of the city, recording live with a full band at various locations around NYC.

Begin Again is aggressively likable. It’s all about winning you over you with popular actors, constant positivity and pleasant-yet-forgettable songs that are recorded in one take. Knightley even handles her own vocals, and she does just fine.

Of course she does! That’s how fairy tales work!

Look, as feel good movies of the year go, you could do much worse than Begin Again. It’s often charming. But there’s no escaping the irony in the “homemade” nature of Greta’s demo.  Carney used similar tactics for Once, and came out a big winner.

Now, like Greta’s ex, Carney has big money behind him, but too little soul in the finished product.