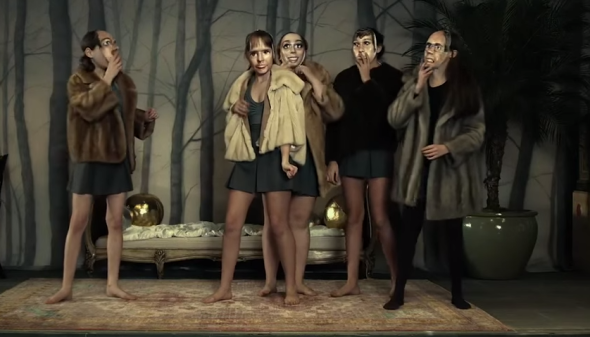 Simultaneously spoiled and neglected, handed every luxury imaginable and then abandoned to do with their time what they will, a group of 12-year-old girls at a sleepover pay the price for a too-modern childhood.

Loosely inspired by true events, #Horror tracks the evolution of the mean girl. Between cyberbullying and online gaming, one pre-adolescent clique elevates their coming-of-age angst into a post-modern horror show.

Writer/director Tara Subkoff populates her soullessly luxurious world with bizarre and arresting visuals, and her cast – both the seasoned adults and the mostly unknown child performers – offer a range of unique and compelling performances. The atmosphere created is so detached, stylized, and surreal, you can imagine almost anything happening.

Subkoff has provocative things to say about coming of age, and though none of them are entirely novel, she wisely avoids one-sided arguments. Yes, the five 12-year-olds ultimately blame their selfish, negligent parents for their own fucked-up-edness, although the film’s heroine Sam, (Sadie Seelert) chooses to reject her loving and protective mother in favor of the attention of her new school’s mean girl circle.

Subkoff’s film is at its best when it drops you into the undercooked logic of a child.

“Nothing is mean if you laugh,” explains a genuinely earnest and confused Cat (Haley Murphy). And that’s really the point of the film: kids are stupid, parents are blind, the world offers more immediate and accessible dangers than ever before, and that time between childhood and adulthood is a haze of misunderstood circumstances and unavoidable selfishness.

Chloe Sevigny and Timothy Hutton are over-the-top wonders, both horrifying yet wonderful in their own way, but Subkoff’s real victory is her ability to capture, with the help of a game pre-adolescent cast, the combination of cynicism and playfulness that marks these particular girls’ youth.

The horror story is a tad thin – derivative, even – but what Subkoff, her visual panache and her cast manage to do with it keeps you intrigued and guessing for the full 90 minute run.