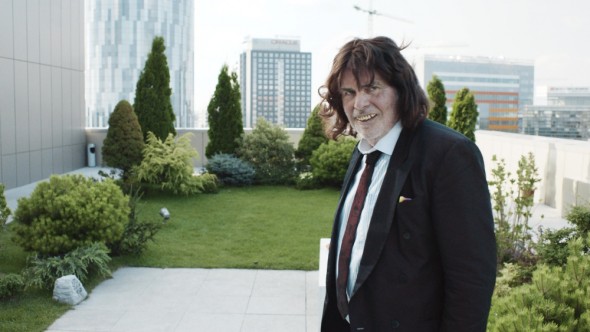 It has already been a rough year. If you are looking for a movie to help you escape the bleakness of the year, Toni Erdmann isn’t exactly going to be it. No space battles, no superheroes, no fantastic beasts. It’s a spare and complicated film about a sad, silly man trying to reconnect with his distant, ambitious daughter.

The daughter, Ines (Sandra Hüller), works for an international consulting firm based in Bucharest. Her job is to compellingly propose outsourcing to oil company management. She shoulders the responsibility of job losses so that executives can sidestep the guilt. Ines doesn’t see much of her family and her father, Winfried (Peter Simonischek), jokes about hiring a substitute daughter to take Ines’s place (at Ines’s expense).

After the death of his beloved elderly dog, Winfried visits Ines, appearing unannounced in the lobby of her office building. Unfortunately, she’s in the midst of a project that may help her make partner. Her dad’s presence and corny jokes (delivered in front of clients) get under Ines’s skin and threaten her advancement.

Failing to reconnect, Winfred agrees to go home. Ines hits a bar to vent to some networking contacts about her horrible weekend. The man next to her at the bar introduces himself. It’s Winfried in a bad wig, with bizarre false teeth, claiming to be “Toni Erdmann”—consultant and life coach. Unwilling to out him (and by extension herself) to her contacts, Ines plays along while Toni inserts himself into her professional life, showing up at her office and at after-hours parties.

Hüller and Simonischek are outstanding, giving utterly believable, finely wrought performances—Hüller in particular. Ines’s carefully crafted professional polish requires that very little of her interior life is visible, and Hüller manages to get a lot across with the twitch of a lip or a downward tilt of the head.

But this is not the heartwarming, wacky father-daughter reconnection movie you might expect. There’s little of the tidy warmth that characterized Thicke’s Growing Pains. But there is a lot more realism. Writer/director Maren Ade’s film is almost three hours long, giving time to contextualize the characters in a way more typical of the new Golden Age of Television. We understand why Ines might be tempted to throw herself out of her apartment window, and we get why Winfried/Toni might not exactly have the answers for why she shouldn’t. But we see how hard he tries.

This is definitely not the movie that delivers on the uncomplicated warm fuzzies. It’s sad and weird, sometimes funny, and thoroughly awkward. But it might inspire you to embrace a loved one, and after this year, a good long bear hug is probably something we could all use.