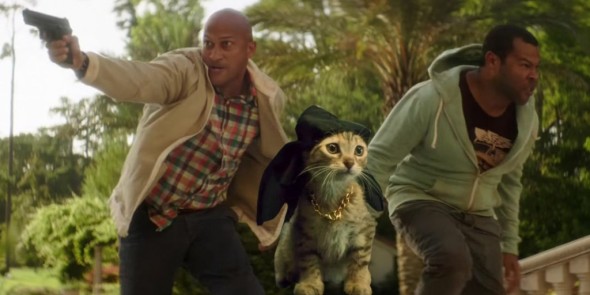 If you’re a bit skeptical at the news of two more sketch comedy stars taking their act to the big screen, who can blame you? The track record is hardly stellar, but one bad ass kitten is here to put a paw print in the win column.

After five solid years on Comedy Central’s Key & Peele, Keanu is the feature team up for Keegan-Michael Key and Jordan Peele, who display a keen self-awareness about how to pivot from short sketches to ninety minutes of solid laughs.

Peele, who also co-wrote the script, plays Rell, who’s sulking alone in his apartment after a sudden breakup. By the time his best friend Clarence (Key) arrives to console him, Rell’s frown has been turned upside down by the arrival of a stray cat. Rell names him Keanu, becoming an obsessively doting pet owner until…..Keanu is gone.

Turns out this kitten has more than claws, it has a history with drug dealing gangs, and Keanu has fallen into the clutches of the 17th Street Blips.

With that, Clarence and Rell go from arguing about who took more beatings in high school to infiltrating the Blips as bonafide gang bangers Shark Tank and Techtonic, aka the “Allentown Boys” who carry a rep as mysterious and legendary as Kaiser Soze’s.

Ridiculous situations ensue, driven by the leads’ multiple shifts from minivan-drivin’ suburbanites to pipe-hittin’ gangstas and back again. Key, in particular, delivers some riotous moments, including a classic sequence where Shark Tank must defend all that George Michael on his iPod.

One or two dry spells aside, director Peter Atencio keeps the inspired bits strung together with a surprisingly engaging narrative, tossing in some clever odes to The Matrix, Kill Bill, The Shining and more, plus a nod to K&P’s TV past with a well-placed”Liam Neesons!”

The best of Key and Peele’s work on Comedy Central was as smart as it was funny. Keanu is proof they haven’t gone soft by going Hollywood.