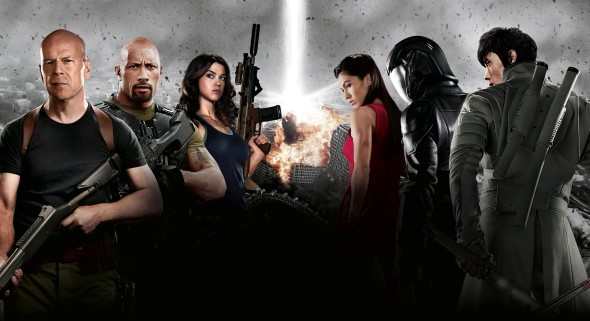 At the risk of sounding too much like Grandpa Simpson…In my day G.I. Joe had Kung Fu grip and that was all and we liked it!

Before G.I. Joe:  Retaliation started to roll, Hope asked me if I knew any of the characters besides good old Joe. Since the long ago days when I played with the action figures, it seems there was a cartoon and one previous movie. Though I was vaguely  aware of 2009’s The Rise of Cobra, I have to admit I didn’t know Cobra Commander from Cobra Kai. Sweep the leg!

The point is, this G.I. Joe sequel is ridiculously bad, only redeemed by one sweet mountainside action sequence and the curious moments where it seems to know how bad it is and lets some self-aware humor sneak in.

If lines such as “Soon the world will bow down to Zues,” and “Storm Shadow, tell us Zartan’s plans or die!” sound more suited for Saturday-morning fare, A) you’re correct and B) you’ll be disappointed to learn this dreck was written by Rhett Reese and Paul Wernick. These guys wrote the sublime Zombieland, and knowing that hurts my heart.

Director Jon M. Chu brings a resume loaded with the Step Up movies and a Justin Beiber concert film, which makes perfect sense. Retaliation sports the volume, pace, and emotional depth of a frenetic music video.

Oh, there’s Dwayne Johnson and Bruce Willis, finally deciding to team up since they’re in every other movie anyway. Johnson flexes well and makes sure the Under Armour logo gets screentime, while Willis lands some good one liners, especially when he insists on calling the female Joe “Brenda” even though her name is Jaye. And ladies, you get Channing Tatum (with a fake facial scar – rugged!) for a full 9 or 10 minutes!

Most of Retaliation truly seems aimed at kids, with just enough silly narrative and sophomoric exposition to keep things moving from one scene of extreme bloodless violence to the next. Then, just to throw the adults a funny bone, a joke about taxes or North Korea comes flying in from left field.

The biggest joke, though, was on me, as I actually stayed through the credits thinking there might be an extra scene.

Subscribe in a reader
← Wait a minute – Kristen Stewart can act?
So, So Wrong →
Scroll Up