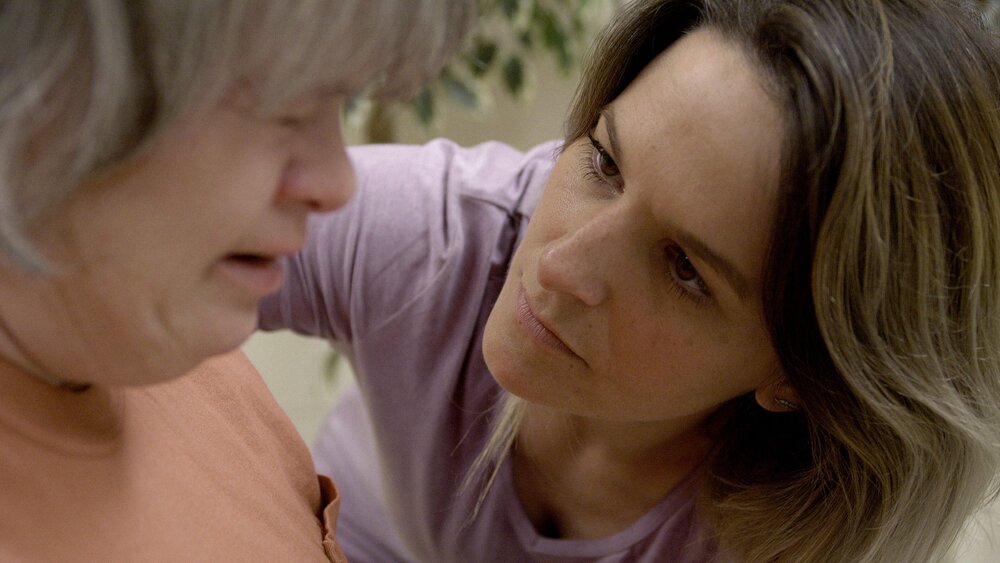 Authenticity is certainly the main differentiator between Chad Crawford Kinkle’s latest horror and others of the genre.

It’s been eight years since the filmmaker released his underseen backwoods gem Jug Face. He once again pits a tenacious female against the unrelenting pressure of an unholy presence, but Kinkle has a more personal kind of dread in store with Dementer.

Katie (Katie Groshong), looking for a fresh start, applies for a job at a skills training facility that works with adults who have special needs. She’s hired, working with clients two days a week in the facility, then spending two nights in a group home with three of them.

Kinkle’s sister is an adult with Down Syndrome, which not only elevates the reality of the situation but also the tenderness and anxiety around the character’s safety. You can almost feel the filmmaker’s own personal dread over his sister’s vulnerability in an untrustworthy world.

Aside from Larry Fessenden, who appears briefly, Groshong is the only professional actor in the film. Kinkle, working with a skeleton crew, films in an actual skill center. The majority of the staff and clients represented in the film are, indeed, staff and clients.

The approach gives the film a verité style often seen in horror films, rarely if ever seen in a horror film with a main character who has special needs. Dementer lacks any of the sheen or noble heroism you often find in films centered around a character with a disability. The realism adds a level of discomfort, a sense that vulnerable adults who need care could easily find themselves in a precarious situation.

Kinkle mines these anxieties as Groshong begins to see and hear signs that suggest Stephanie may be in real danger. As she races against the clock to save her, Kinkle slyly upends plenty of horror tropes.

It’s an often fascinating deconstruction of a particular subgenre of horror, an approach that usually benefits from the verité style. But too much of the loose narrative feels like filler. We watch Katie buckle her seat belt no fewer than five times.

Unanswered questions can strengthen a film, but Dementer feels underwritten. Still, you get the sense that Kinkle made the best of what he had on hand and told a deeply personal story in the most authentic way he could.