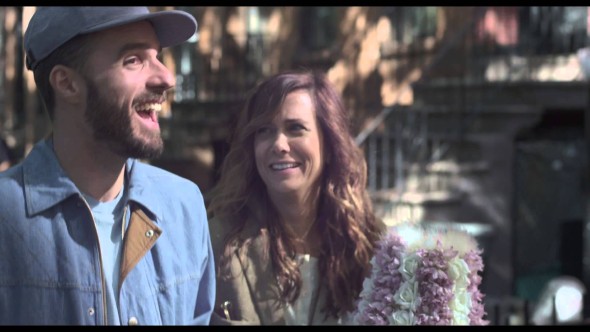 So, does Nasty Baby live up to its title?

You won’t find any devil child on a bloody rampage, or any precocious toddler cracking dirty jokes with the help of a celebrity voiceover.

Instead, writer/director Sebastian Silva (The Maid, Crystal Fairy and the Magical Cactus) delivers a semi-autobiographical slice of adulthood that keeps you cleverly off balance until it makes a drastic narrative decision that is likely to win it as many detractors as it does converts. Indeed, Silva has said the Toronto Film Festival was so turned off by the third act, it rejected the film entirely.

The “Nasty Baby” is actually a video project that Freddy (Silva) is hoping to debut at a New York gallery. But lately, he’s been trying to secure a different sort of arrival.

Freddy and his live-in boyfriend Mo (Tunde Adebimpe) want a baby, and their friend Polly (Kristen Wiig) wants to help, but after several tries at artificial insemination, Freddy’s sperm count is found to be a bit low. The obvious answer is for Mo to step up, but he is having reservations about such a commitment.

Meanwhile, a small annoyance in their Brooklyn neighborhood is slowly turning into something bigger. A local resident who calls himself “The Bishop” is making noise much too early in the morning, shouting at Freddy, and getting aggressively friendly with Polly.

Is he a harmless nut fighting gentrification, or a potentially dangerous threat?

The gradual manner in which The Bishop affects the lives of the three main characters is Silva’s skillful device for upsetting the conventions usually seen in this genre. Nasty Baby may be a difficult film to love, but that is precisely what makes it effective.

A loose, improvisational script, subtle direction and finely drawn performances draw you into a recognizable neighborhood where you feel comfortable – until you don’t.

There are countless films you want badly to like, but know in your heart they don’t earn it. Nasty Baby sits proudly on the opposite pole, inviting your scorn until you realize it’s gotten completely under your skin.