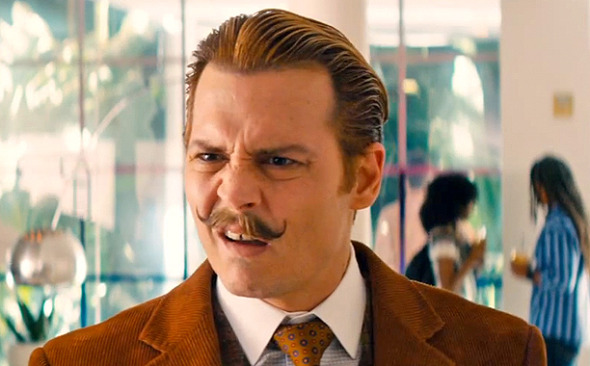 Based on the novel “Don’t Point That Thing at Me,” the film finds Depp as Charlie Mortdecai, English art dealer and all-around bumbling scoundrel. He’s part Magoo, part Bean, and once a famous painting goes missing, a heavy dose of Clouseau.

He and and Mrs. M (Gwyneth Paltrow) are living large but deep in debt, when the British secret service offers a possible way out. Someone in America has been secretly deflating footballs right before the big game, and…oh, wait that’s something else.

Mortdecai must track down a priceless masterpiece before it winds up in the wrong hands, and the convoluted plot involves jet-setting, mustache infatuation and multiple instances of “sympathetic gag reflex.” Director David Koepp tries hard to inject some pizzaz, but Eric Aronson’s script feels more like a rough draft than a finished product.

The film’s saving grace (well, besides the casting of Olivia Munn as a nymphomaniac) is, of course, Depp. He’s a perfect example of great timing in search of some comedy, and he delivers a fully realized performance that manages, against some pretty long odds, to give Mortdecai its few moments of charm.

← Dangerous Waters
Not Too Sweet →
Scroll Up