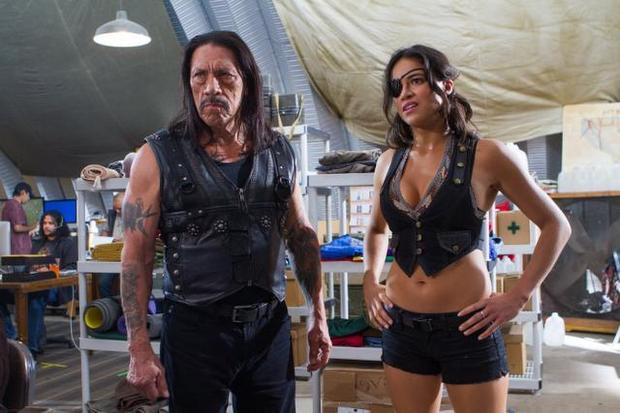 The legend of Machete began in 2007, with director Robert Rodriguez‘s standout faux trailer in Grindhouse. That trailer screamed for an actual feature, and Rodriguez obliged in 2010 with Machete, a wonderful homage to 70s exploitation films.

The original had many things going for it, but Machete‘s secret weapon was what it didn’t have:  comic parody.

Sadly, that is all Machete Kills is interested in offering.

Danny Trejo is back as the titular badass, but this time his exploits deteriorate into an Austin Powers-type mission to thwart the plans of a Dr. Evil-type madman (Mel Gibson). Nothing feels like a hat-tip to the genre, especially the female characters, scripted this time with less fun and more degradation. It is all so incredibly dumb and misguided that an hour and forty minute running time feels like twice that.

Just weeks ago, Kick-Ass 2 failed in a similar fashion, as new filmmakers took over the franchise and completely abandoned everything that made the source film so worthy.

The demise of Machete Kills is a little harder to understand, as Rodriguez is back to direct, and, as in Machete, the screen is filled with wild casting choices (Carlos Estevez aka Charlie Sheen, Cuba Gooding, Jr, Sofia Vergara, Lady Gaga). The screenplay, duties, though, this time fall to newcomer Kyle Ward, which raises some questions.

How old is he? Did he even see the original Machete? Why did Rodriguez accept this travesty?