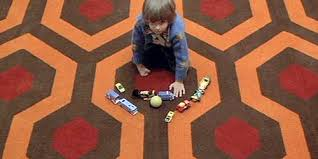 As evidenced by the phenomenal attention to detail shown in The Simpsons Treehouse of Horror V, Stanley Kubrick’s magnificent film The Shining inspires close examination. Director Rodney Ascher assembled some of the most inspired – obsessed, even – for his documentary on the Kubrick ghost story, Room 237.

If you’re going to make a movie about Kubrick, it better look good, and this one does. Ascher never puts the commentators on screen, preferring instead to replay fascinating scenes from The Shining, or pad with genius cut-ins from other films – some Kubrick, some not. His endlessly fascinating clip choices keep his doc engaging, while appealing to the movie nerd in us all.

Off screen, we hear the thoughts of ABC News’s Bill Blakemore, Albion College historian Geoffrey Cocks, playwright/artist/author Juli Kearns, recording artist John Fell Ryan, and “authority on the hermetic and alchemical traditions” Jay Weidner. Each has his or her own theory to spin. For instance, 2+3+7=moon. And while these theories are all a bit wild, most carry just enough evidence to keep you intrigued.

It would be too simplistic to take Room 237 as a deconstruction of The Shining, and those hoping to uncover Kubrick’s deeper meaning may be disappointed.

But what the film does, it does well. It explores one of cinema’s most exquisite films, using it to encourage the spectator’s active participation in viewing. In doing so, it positions film as an art equal to literature or painting in terms of thematic dissection.

To be fair, Kubrick invites obsession. It’s hard to watch any of his films, The Shining in particular, without feeling submerged in images and symbolism just out of your reach. It’s the kind of richly textured experience ideal for a ghost story.

Or a film that confesses the creation of another film in which the moon landing was faked.

Unless it’s a film about the slaughter of the American Indians. And Jews.