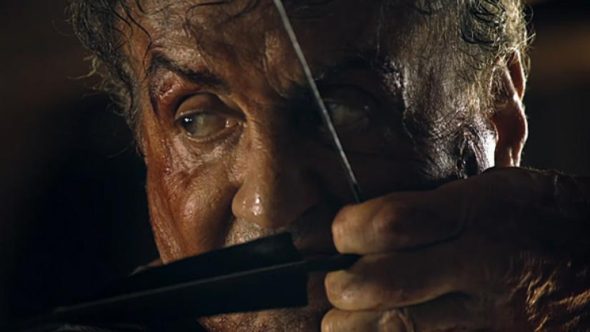 For those who’ve followed the Rambo franchise, Rambo: Last Blood (please, God, please say it is so) will look familiar.

Stallone is here. The deeply brutal violence is here. The one man against a depraved world is here. But in place of the broken heart of a soldier mistreated and forgotten by his government, of the prodigal son bringing US Military chickens home to roost, is something far less complex.

No, John Rambo isn’t turning his training on the rotting center of the military industrial complex at home or in Burma. He’s actually a pretty relaxed, aging cowboy on the Rambo family horse ranch in Arizona, sharing a cordial friendship with his housekeeper and raising her teenage niece as if she were his own.

John Rambo’s teenage daughter. Oh my God, can you imagine a bigger nightmare?

Stallone can. Co-writing along with Matthew Cirulnick and Dan Gordon (who’s wearing a camo vest and AK in his imdb photo), Sly shows Gabrielle (Ybvette Monreal) exactly why adolescent girls need to squelch their own sense of agency.

Gabrielle wants to go to Mexico to find her deadbeat dad. She’ll be leaving for college soon and she just wants to clear the air. And so, against Rambo’s wishes she secretly heads south of the border. And you know what’s in Mexico?

Well, in the undulating sea of thugs, gang bangers, drug lords, rapists and sex traffickers is a lone investigative journalist who seems like very good people. She has three scenes.

Director Adrian Grunberg crafts a film that mercifully requires little attention to dialog as Stallone mumbles indecipherably through his own pages. The 73-year-old nabbed his second Oscar nomination for acting in 2016, revisiting the old war horse Rocky in a supporting role.

Every 30 years or so, Sylvester Stallone gives a good performance.

Creed was three years ago.

But you don’t go to a Rambo movie for the acting! You go for the carnage, and hoo boy, Last Blood does not skimp.

People give horror a hard time because of all the slicing, dicing, arterial spray and virgins in peril, but in nearly every instance, we are meant to recoil at the violence. In this film, we are meant to celebrate it: every decapitation, dismemberment, gutting, castration, every head blown clean off a blood-spraying, still standing body is our own vicarious victory.

Earlier this year, after another mass shooting in the US, Hollywood shelved the Craig Zobel horror film The Hunt because they wanted to send a message that gun violence shouldn’t be celebrated. This weekend, they released Rambo: Last Blood.

The Hunt is the story of wealthy Americans kidnapping poor people to hunt them down, but the tables are turned and the poor people kill all the rich people.

Rambo: Last Blood, on the other hand, is a MAGA fantasy come to vivid, bloody fruition.