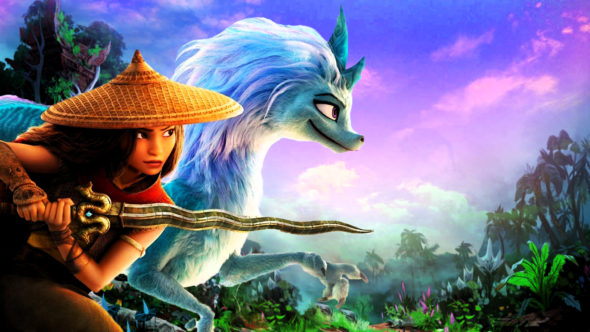 Raya and the Last Dragon

Disney was looking to do something different.

Well, it’s still a princess, unfortunately, so not that different. But Raya and the Last Dragon marks an impressive step forward in a number of ways.

Raya (Kelly Marie Tran) opens the film Mad Max style, riding some alien vehicle through a post-apocalyptic landscape, her face covered, her eyes darting to and fro in search of something–predator? Prey?

The apocalypse itself happened just six years earlier, and Raya had a hand in the world’s undoing. Now here she is, at the beginning of the journey that could put the pieces back together.

Tran delivers a heroine you can genuinely understand. She is logical, and when she tends to lean toward head and away from heart to make decisions, it’s hard to fault her.

Her sidekick, in grand Disney fashion, is the shapeshifting but fantastically colorful dragon Sisu, voiced by Awkwafina. The comic’s brand of endearingly self-effacing humor punctures the film’s preciousness at all the right moments.

There is a central emotion, a powerfully executed conflict in Raya and the Last Dragon that never feels as if it’s been watered down or softened for younger viewers. The conflict speaks of the courage to believe in people even when they have proven themselves untrustworthy.

It’s a notion that flies in the face of logic, really, but the point of the film—and possibly of life—is that you cannot build a whole community if all you have are fractured segments unwilling to take that leap.

There’s just so much stuff here.

The film runs a full two hours, and you feel it. The first twenty minutes is burdened with piles of exposition, and the mostly magical second act journey is overstuffed as well. Too many characters to keep track of, let along get attached to, muddy the overall picture. Losing maybe half a dozen characters and trimming 20 minutes from the film would have done wonders for it.

There are problems with the execution, but not with the animation. Raya and the Last Dragon is breathtaking, its world building as gorgeous as it is meticulous. Animators deliver each South Asian-inspired community with its own unique look and feel—from a glinting desert wasteland to a torchlit floating city to a lushly forested community and more. The film is simply stunning and should be viewed on the biggest screen available.

But for all the Raya puts in the win column, it can’t shake the feeling that all four directors and the team of ten (10!) that built its script and story were culling from plenty of pre-owned parts. The Disney formula still has princesses, they’re just warrior princesses now.

That evolution may have been overdue, but it’s already starting to show some age.