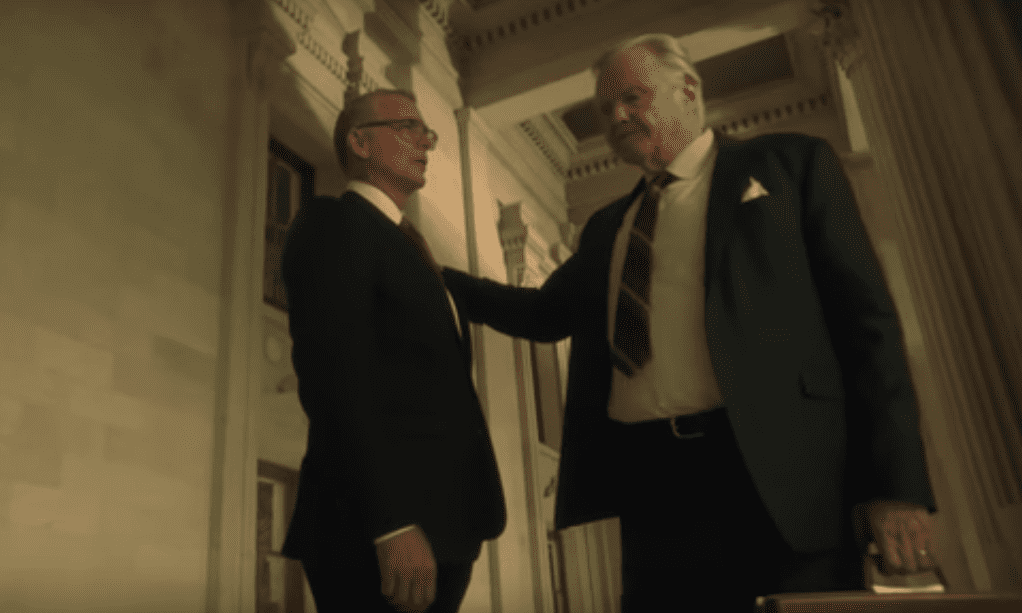 Cathy Allyn and Nick Loeb’s film Roe v. Wade is an unnuanced slog through the events leading up to the landmark 1973 Supreme Court decision.

The directors (who share writing credit with Ken Kushner) frame the court case with the conversion narrative of Dr. Bernard Nathanson (Loeb). According to the film, Nathanson, “the Abortion King” aka “the Scraper,” claims to have been swept up in the wave of 70s women’s liberation and performed seventy thousand abortions until he was confronted with fetal development by way of the advent of ultrasound technology. This results in a breakdown that is unmistakably similar to Charlton Heston’s in Soylent Green—“It’s a person! God forgive me! What have I done?!”

The choice to cast Loeb, whose dialogue delivery bears an eerie similarity to an unsure elementary school student asked to read a passage aloud, in such a pivotal role is but one example of the missteps taken in the film.

The hammy acting is a trait shared among many of the cast members. Jamie Kennedy (Scream), for example, as Larry Lader (co-founder of NARAL Pro-Choice America) all but twirls an imaginary handlebar mustache as he explains how liberals seed the uncritical news media with statistics conjured from thin air. Stacey Dash (Clueless) as Dr. Mildred Jefferson (president of the National Right to Life Committee) fairly vibrates with indignation when her eyes aren’t filled with tears at the equating of abortion to slavery or in polite reference to her own infertility issues.

Even if the acting was better, all the emotion would seem misplaced given how much time is devoted to characters debating constitutional law. There is not enough room in a two hour movie to detail the establishment of the Pro-Life and Pro-Choice movements plus the evolution of the Roe court case and still deliver the kind of emotional character development that Allyn and Loeb are shooting for.

The political arguments are underdeveloped, the nuances of the court proceedings are difficult to follow, and there are too many characters to keep track of. Joey Lawrence’s (Blossom) character could have easily been cut as his purpose in the film seems to be delivering supporting quotes by founding fathers.

The film’s stated goal is to tell the true story of Roe vs. Wade. However, this is something it cannot really achieve. Missing is any coverage of the personal, economic, social, or medical reasons why a woman might seek an abortion in the first place. It’s a pro-life persuasive essay masquerading as a soap opera/civics lecture and it’s not particularly good at being any of those things.