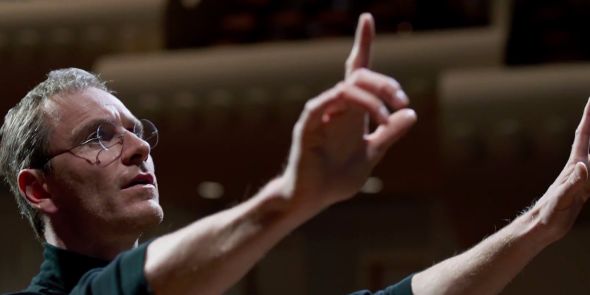 The first voice you hear in Steve Jobs is from legendary writer Arthur C. Clarke, explaining in a decades-old interview the many ways computers will one day affect human life.

It’s not only a clever way to introduce a film anchored in the rise of personal computers, it’s a subtle reminder that some people just see the future better than others.

From there, writer Aaron Sorkin and director Danny Boyle take a visionary approach themselves, crafting an appropriately intense and completely engrossing profile of Jobs’s history with Apple, Inc.

We get a character study in three acts: the launch of the Mac brand in 1984, Jobs’s start of Next computers in ’88 after his ouster from Apple, and his triumphant 1998 return to the company he co-founded. A more traditional biopic style may still have been compelling, but it would never be the mesmerizing time capsule film Steve Jobs is.

Sorkin and Boyle understand that a man so self-aggrandizing and obsessed with design deserves a treatment that is both. Sorkin’s wordplay – always of the smartest-guy-in-the-room variety (because, let’s face it, in most rooms he probably is) is piercing and ambitious, barely pausing for air before another sharp line finds its mark.

The settings seldom move beyond the backstage areas of convention halls, but Boyle – as he did so masterfully with the claustrophobic 127 Hours – expands the film’s universe with effective flashbacks and fluid camerawork. The look is appropriately sleek and almost poetic, highlighted by a beautiful image of Apple board members voting to fire Jobs beneath windows being pummeled by the pouring rain.

Michael Fassbender delivers a masterwork as Steve Jobs, making him an utterly fascinating enigma. This is miles away from a complete biography, but Fassbender takes full advantage of the chances Sorkin and Boyle give him to offer glimpses behind the bluster and into Jobs’s psyche.

As Apple co-founder Steve Wozniak, Rogen brings impressive dramatic chops to a role integral to some of the film’s most powerful scenes, as “Woz” pleads with his old friend to give a small measure of credit to someone other than Steve Jobs.

It is a movie that’s overly dramatic in spots and yes, idealistic as well, but that feels more than fitting for a look at the wages of genius. Challenging and ferocious, brilliantly conceived and performed, Steve Jobs is nothing short of thrilling cinema.