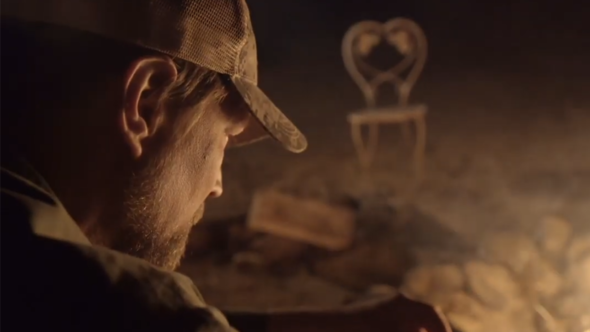 Twenty-one years after the phenomenon of Blair Witch, that film’s co-director, Daniel Myrick, returns to the mockumentary fold with Skyman.

Carl Merryweather (Michael Selle) claims he was visited by an extraterrestrial, Skyman, when he was 10- years-old. That event made Carl a minor celebrity in his small California town and it’s completely shaped his life. As his 40th birthday draws near, Carl becomes more convinced that the Skyman is going to return. With his skeptical sister Gina and a documentary film crew, Carl goes back to the spot in the desert where the original encounter took place.

If you think Skyman is going to be overflowing with murderous E.T.s, outlandish found-footage F/X, and tense scares, then you are going to be sorely disappointed. Myrick’s approach to Skyman is more akin to the original Blair Witch than to the found-footage spectacle we’re now used to. It’s a very deliberately paced film — maybe too deliberate.

Given Myrick’s pedigree with the genre, it’s fair to have expected something a little more scary with Skyman. Maybe not a “vengeful witch in the woods” scary, but I would’ve settled for a Fire in the Sky kind of disturbing found footage vibe. The film’s more sci-fi finale is a tacked-on afterthought. The audience, like Carl, eagerly awaits the return of the Skyman. Unlike Blair Witch with its tantalizing nuggets of the witch spaced through the film, the Skyman himself is a virtual no-show.

Selle is outstanding as the awkward Carl. Selle and Myrick have created a character driven by his obsession, but not at the expense of his friends and family. Roy Neary from Close Encounters he ain’t. This decency, along with Selle’s subdued performance, makes it easy to root for Carl.

Outside of a great lead performance, Skyman offers up nothing the audience hasn’t seen before, and mostly just leaves you wanting.

← Unforgiving
Faces of Death →
Scroll Up