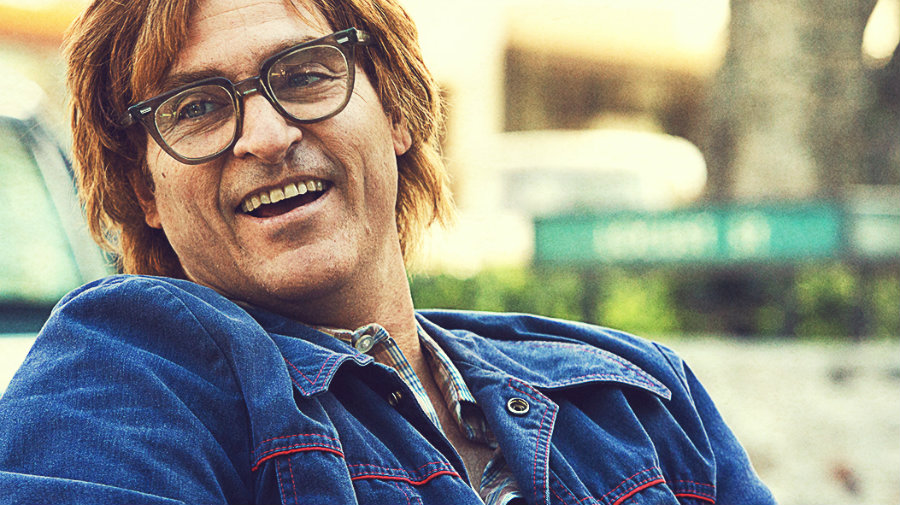 Don’t Worry, He Won’t Get Far on Foot

In case you are missing it, Joaquin Phoenix is having one hell of a year. The inarguable talent is fresh off the relentlessly wonderful You Were Never Really Here (watch it right now!). Later this year we’ll get the chance to see him in Mary Magdalene as well as Jacques Audiard’s Western, The Sisters Brothers—both films boasting extraordinary casts.

Sandwiched in between his turns as gun-for-hire (YWNRH) and Jesus (MM), the clearly versatile actor portrays cartoonist John Callahan in Gus Van Sant’s biopic Don’t Worry, He Won’t Get Far on Foot.

Portland-based Callahan used creating cartoons as an outlet for his frustration, creativity and humor following a car accident that left him paralyzed. His simple visual style (both arms and hands were badly compromised by the paralysis) and his dark, taboo-driven humor found favor and protest in his hometown newspaper.

Phoenix charms and breaks hearts in equal measure as Callahan. What the actor conveys in breathtaking fashion is discovery. After Callahan’s accident and through his fleeting moments of clear-headedness, the character affords Phoenix many opportunities to recognize, accomplish or notice things for the first time. His interaction with an adorably saucy sex therapist, for instance, is pure joy.

His is not the only wonderful performance in the film. Jonah Hill effortlessly conveys a wearied tenderness that reminds you how truly talented an actor he is. Jack Black has a small but gloriously Jack Black role, and the AA group (Udo Kier, Beth Ditto, Mark Webber, Kim Gordon and Ronnie Adrian) offer rich and interesting characters regardless of their minimal screen time.

Rooney Mara, on the other hand, seems like she’s acting in an entirely different film. I fully expected her character to be a figment of Callahan’s imagination, pulled intact from another movie.

Van Sant bounces back from a creative lull (The Sea of Trees, anyone?), showing, among other things, his remarkable knack for period detail.

And while the 12-step structure feels both too stifling and too familiar for such an irreverent central figure, Van Sant bursts through that frame with a non-chronological series of vignettes and wild antics. As the film progresses, step by dutiful step, Van Sant fills gaps with quick jumps back and forth through drunken episodes and pivotal moments.

As interesting and entertaining as these flashes are, the chaotic lack of chronology fits so poorly with the rigid timeline of the film around it that the whole feels like an experiment gone wrong.

But so much of the film goes very, very right—thanks in large part to another award-worthy performance by Phoenix.