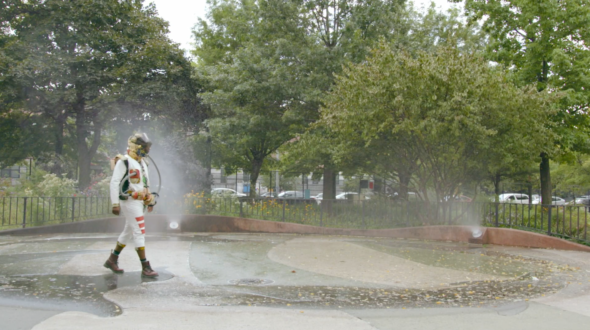 As the world sweats and readies itself for a total solar eclipse, Story gets people talking.

Her subjects are not tongue tied, and their soliloquies are loosely linked one to the other by their in-the-moment nature. You can’t talk about this moment, it seems, without waxing nostalgic about the past and worrying about the future.

How do they feel about the future?

Some are compelled to take action, to exert some control over their present to claim their own future. Others prepare. Some take note of what’s going on around them and that’s enough. Some don’t even do that.

The film is equally fascinating whether it’s digging into grand ideas or sitting in a sidewalk lawn chair chit chatting about the nastier, day-to-day consequences of gentrification.

It’s best, though, when it walks alongside Afronaut – New York artist or man from the future who’s come back to make notes on the present and offer sage advice?

Multiply the probability of a harm by the magnitude of the harm.

All directors manipulate the message, especially documentarians, and Story is no different. Story’s unshowy curiosity proves an amicable though not passive guide. She doesn’t judge, neither does she excuse.

Story talks with big thinkers in their spacious, impressive apartments. She follows activists to the streets as they practice to effect change. She sits on a barstool with Yankee fans who’d like to reframe racism as “resentment.“

Is the future controllable, inevitable, or both? Are we preparing for it, or will it eat us whole like the moon ate the sun that August? The answer is ultimately surreal – just ask Afronaut.