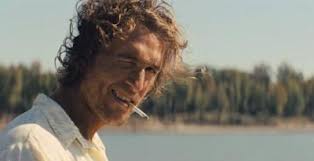 Jeff Nichols’s criminally underseen Take Shelter was the best film of 2011. Poetic and understated, steeped in the mores of small town Ohio, this story of a man haunted by visions of the apocalypse benefitted from a treatment fully at home in its setting. (It was also buoyed by faultless performances from Michael Shannon and Jessica Chastain.)

Nichols relocates to riverbeds in Arkansas for his follow up, Mud, a soulful, Huck Finn-style tale about modernization and the romantic notions that struggle against it.

Ellis (a powerful Tye Sheridan) lives with his parents on a ramshackle houseboat, where they eke out a living selling the fish they catch. His buddy Neckbone (newcomer Jacob Lofland) lives with his Uncle Galen (Shannon), who survives on whatever bounty he can dredge from the river bottom.

To shake off the summer blues, the boys go seeking adventure on a little nearby island. There they find more than they bargained for in Matthew McConaughey as the fugitive Mud.

Last year, McConaughey turned around an increasingly craptacular career with a steady stream of magnificent turns in edgy, unique, independent films like Killer Joe. Mud shows the lanky Texan is still interested in being an actor as opposed to a star, and his charming rogue-in-need commands attention. More than that, his generous performance allows the younger actors to really shine.

Sheridan proved himself in 2011’s The Tree of Life, but here he shoulders the bulk of the film and does so with aplomb. Through his eyes we see the bittersweet beauty, confusion and longing required in any good coming of age tale. His thoughtful performance draws attention to the unhappy truth that the more someone means to you, the more likely they are to inadvertently disappoint you.

With only three films under his belt, Nichols is proving himself a powerful storyteller. Beautiful compositions, lyrical pacing and imagery, a profound sense of place, all animated with raw and engaging performances – his approach simply hasn’t yet misfired.

Mud lacks the disturbing punch of Take Shelter, but replaces it with thematic beauty. It becomes a richly textured image of the punishment and resilience of youth. At the same time, Mud uses that familiar adolescent struggle to mirror the quickly disappearing freedom of those beleaguered souls looking to make a life on the river.

3 thoughts on “His Name is Mud…Really”