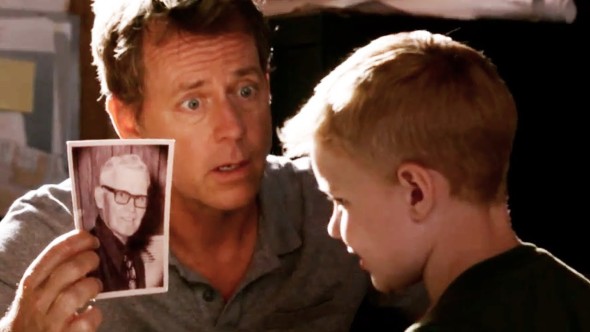 Heaven Is for Real

Whatever message a movie may have, subtlety in sending it is rarely a bad thing.

Heaven Is for Real turns out to be more subtle than the title would suggest, with a solid group of actors to help keep it grounded when it’s in danger of too much, pardon the expression, preaching to the choir.

Based on the true story described in the best-selling book, the film introduces us to Colton Burpo, a four year old Nebraska boy who says he went to heaven.

Colton’s father Todd (Greg Kinnear) is the local pastor, with a loving wife (Kelly Reilly) and a seemingly all-around satisfying life. His peace is shattered, though, when Colton suffers a ruptured appendix and is rushed into emergency surgery where his life hangs in the balance.

He recovers, and though he was never clinically dead, Colton begins telling mom and dad that he left his body in the operating room and went to Heaven. There, he not only met Jesus, but was introduced to family members from the other side, at least one of whom his parents never told him about.

Would you believe a four old year telling that story? Well, it helps when this one is played by the impossibly composed Connor Corum. In his debut, Corum is not only cute beyond words, but his delivery of every line is totally believable. I don’t know where they found this kid, but he’s a keeper.

Do things get preachy? Of course, Kinnear plays a preacher, after all, and there’s no mistaking the abundance of “traditional” traits in Reilly’s stay-at-home helpmate character. But, the film also addresses the negative reaction to the child’s claim, starting with leaders of Burpo’s own church.

Veteran actors Margo Martindale and Thomas Haden Church move these characters beyond the one-note rubes they could have easily become. Less successful is a half-hearted attempt to confront scientific objections, as Burpo’s visit to a psychologist is reduced to little more than a courtesy call to the religion/science debate.

The very nature of its story ensures that Heaven Is for Real will be both dismissed and celebrated, sight unseen. Regardless, the important question is, how well does it tell that story?

Despite weak moments in the script, there’s enough heart and earnestness here to make it accessible, no matter who you believe.