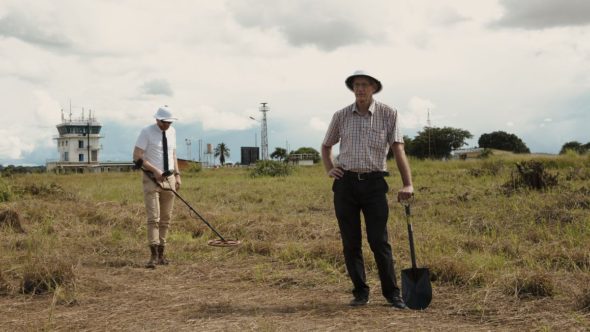 Initially an exploration of the suspicious death of UN Secretary General Dag Hammarskjöld in 1961, Mads Brügger’s documentary Cold Case Hammarskjöld takes a sharp turn down a rabbit hole into the lengths taken to maintain white supremacy in Africa.

In a meta move, Brügger makes himself and the process of creating the documentary as much of a focus as Hammarskjöld and the film’s elderly interview subjects. Brügger’s a bit of a fop—dressing in the same clothes affected by the “villain” of the film and occasionally sporting a pith helmet. In much of it, Brügger looms over a black female secretary explaining the twists and turns of his years-long investigation.

You are never unaware that the narrative is being shaped by a white male European.

Which, of course, is much of what the film is about—who gets to shape the story. And the story is both about what really happened to Hammarskjöld (pilot error or multinational assassination conspiracy) and the story of who gets to script the future of Africa.

The looming is an interesting move, but tends to slow down the pace of the film. Much of the information is presented twice—in the style of a more conventional documentary and via Brügger’s pontification to the secretary.

With such a breadth of information to cover, the film would have benefited from a bit less artifice and a bit more contextual information. Still, it’ll stay with you, prompting some serious thinking about the intersections of political and corporate interests and what people will do to maintain power.